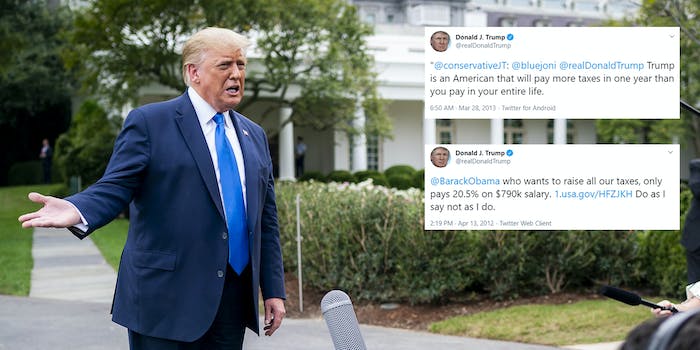 A few of President Donald Trump‘s old tweets about paying taxes have resurfaced after the New York Times reported that the president paid close to no taxes for years.

The Times obtained a number of Trump’s old tax returns that showed he didn’t pay income tax in 10 of the previous 15 years, including just $750 in federal income tax in 2016 and 2017.

The report sheds light on Trump’s tax returns, long-sought-after documents that the president has refused to share. While the Times report documents a relatively little amount of taxes paid by the president, old tweets have resurfaced where he was bragging about paying taxes and attacking the rate at which former President Barack Obama was paying taxes.

“@BarackObama who wants to raise all our taxes, only pays 20.5% on $790k salary. Do as I say not as I do,” Trump, then a reality television star, tweeted.

A year later, Trump retweeted someone who claimed that Trump “will pay more taxes in one year than you pay in your entire life.”

Given the findings of the Times report, both tweets were resurfaced by people online, many of whom noted that there “is always a tweet.”

The president deferred to his standard response when shocking news stories about him drop, decrying it as “fake news.”