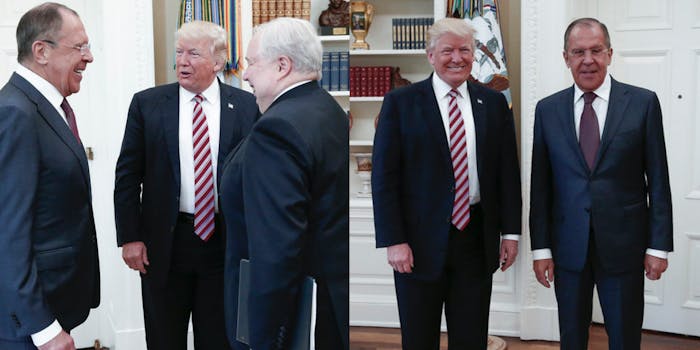 Distrust in the media runs rampant.

Supporters of President Donald Trump are worried, not at reports that the president shared highly classified information with Russian officials during a meeting last week, but that the “deep state” is feeding the mainstream media “fake news” to “smear the president.”

In the perfect example of just how partisan American politics has become, the president’s supporters have reacted with absolute distrust to the explosive Washington Post report at the center of the current controversy, which has since been corroborated by other mainstream media outlets.

The Post‘s sources, several unnamed U.S. officials, claim that during a May 10 meeting with Russian Ambassador Sergey Kislyak and Foreign Minister Sergey Lavrov, Trump shared highly secret information pertaining to the so-called Islamic State—information so sensitive that the U.S. has reportedly not even shared it with close allies.

The meeting had already been the subject of much scrutiny, having occurred just one day after Trump’s controversially firing former FBI Director James Comey. Comey had been leading the investigation into Russian interference in the 2016 presidential election and potential Trump campaign ties to the Kremlin.

The Post ran these claims in an article late Monday and, as the freshly published story rocked the White House, reporters outside could hear shouting from within the presidential residence.

National Security Adviser H. R. McMaster stepped out of the White House to dismiss the Post report, saying that it is, “as reported, false.” His response has become the centerpiece of Trump supporters’ assertions that the Post story is “fake news.”

“The story that came out tonight, as reported, is false. The president and foreign minister reviewed a range of common threats to our two countries including threats to civil aviation,” McMaster said. “At no time … were intelligence sources or methods discussed. And the president did not disclose any military operations that were not publicly known … I was in the room, it didn’t happen.”

On Reddit’s r/The_Donald subreddit, an online community for dedicated Trump supporters, users slammed the Post’s report as a hit job on Trump and brushed aside analysis of McMaster’s statement that poked holes in his claim that the report is false.

“Lol, reporters already trying to discredit McMaster’s statement by claiming that somehow this was a ‘non-denial denial’ and how it’s ‘vague.’ It’s an unequivocal denial,” one individual wrote. “What more do you fucking shills want?”

“Wapo needs to have their press credentials revoked. Only way to stop this nonsense,” states a comment under a separate comment thread on the topic.

The Post‘s use of anonymous sources added to the distrust around the report, with some readers calling on the publication to reveal more about how they received their information.

“The burden of proof is on the Washing Post [sic] to show that their source is legitimate and the claim is real,” another said. “They have not done either. Until they do, this should be treated as Fake News and if they NEVER do, then the Washington Post should face legal consequences.”

Despite Trump supporters’ expressed frustration at journalists parsing McMaster’s words, the fact remains that his official statement failed to address the allegations made in the original article. Instead, his statement refuted claims that were not specifically made in the article—although, in crediting them to the article, he dismissed the whole story as “false.”

For example, McMaster asserted that at “no time were any intelligence sources or methods discussed,” but the original report explicitly says that methods were not discussed. Rather, the report claims that Trump divulged the city where the intelligence was gathered, which the Russians could use to uncover details about the intelligence asset.

The second reason Trump supporters dismiss the article is simply an apparent distrust of the mainstream media—particularly the Washington Post, reporting from which has consistently caused problems for the Trump administration.

Even as the New York Times, CNN, BuzzFeed News, and Reuters published on Tuesday that their own sources had verified the Post’s claims, conservative new media outlets galvanized and exacerbated the “fake news” narrative. Pro-Trump blog the Gateway Pundit simply dismissed the article as “#FakeNews” and a “hit piece.” Sean Hannity, a Trump supporter and Fox News host, tweeted that the Post report was “fake news,” while FoxNews.com buried the story on its front page.

In case you were wondering where the story about Trump revealing classified info to Russians is on the Fox News website pic.twitter.com/j0oaBf7vZD

The right-wing Drudge Report featured the Post report as its lead story on Monday evening with the headline “MORE LEAKS SMEAR PRESIDENT.”

Breitbart News, meanwhile, asserted that the “deep state” leaked the story to Post journalists in an attempt to “smear President Trump.” In the cases of Drudge and Breitbart, the outlets did not claim that the Post story was fake but that people deep within the federal government leaked what Trump did to the press in order to make the president look bad.

As the story continues to evolve, the disconnect between the mainstream media’s assertions and diehard Trump supporters’ views on the news will likely only widen.

At a White House press briefing on Tuesday morning, McMaster clarified that “the premise of [the Post] article is false.” He added that what Trump discussed with the Russian officials was “wholly appropriate given the purpose of that conversation” and blamed those leaking information to the press as the true culprits risking U.S. national security.