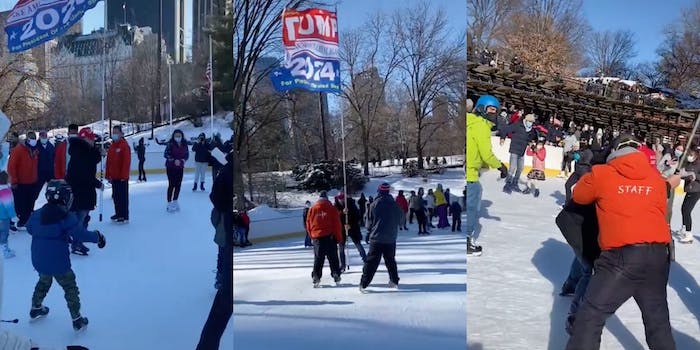 The man was visiting the Trump-run Wollman Rink on what was supposed to be its last day in business.

A man was tackled and removed from a New York ice skating rink yesterday for waving a large Trump 2024 flag on the ice, several videos show.

The man who was tackled, Dion Cini, shared footage of the incident on Twitter. Cini, a supporter of former President Donald Trump and self-proclaimed “Guerilla Marketeer,” was visiting the Trump-run Wollman Rink in Central Park on what was supposed to be its last day in business.

Mayor Bill de Blasio had planned to shut Trump’s Lasker and Wollman Rinks yesterday, six weeks ahead of their usual closing date, in an effort to sever business ties with Trump. However, the city reversed the decision at the last minute.

Video shows Cini extending a long flag pole and hitting the ice with the giant Trump 2024 flag waving high above his head. Before long, several security guards flank him and halt his progress. In another video shared by Freedom News TV, they can be seen gesturing for Cini—whose face mask is now down around his chin—to leave the ice.

An employee then grabs Cini by the coat and begins to push him off the ice. The guard wrestles Cini to the ground as several other skaters cheer. A man in a Travis Scott hoodie steals Cini’s Trump flag.

Cini, who regularly flies his Trump 2024 flag around popular New York City destinations, told the Daily Dot he was already leaving the ice per security’s instructions when the guard attacked him. He also said he went to the hospital for injuries to his back, neck, jaw, and knee. (The Wollman Rink did not immediately respond to the Daily Dot’s request for comment.)

“I brought the Trump 2024 flag to Trump Wollman rink because it was the last day of The Trump organization managing the rink, which they’ve done for the last 30 some years, and wanted to celebrate another Trump accomplishment while also starting a campaign push for 2024,” Cini said. “As I was being attacked I heard people cheering as I was put into a chokehold, which shocked me because I thought they want unity and not watch their fellow Americans being [attacked] over a flag.”

Online reactions to Cini’s rough ejection from the rink have been predictably split.

“Is the FBI going to use Facial analysis to arrest those people that attacked you?” Twitter user @JohnOSmith75 asked. “Im going with a no on that. They only do that to MAGA supporters.”

Others believed Cini got what he deserved and said he wasn’t as cooperative as he claimed.

“No mob was attacking this guy, just the hired ice rink security doing their job by removing a jerk who was ruining everyone’s day,” @LucreeNancy wrote. “He was asked to leave the ice and he refused. Security removed him just like D. Trump likes it. With force and ‘not being so nice’! Wear a mask!!!”

“Interesting how the people who scream ‘LAW AND ORDER’ louder than anyone else seem to understand neither law nor order,” Twitter user Ethan Bearman wrote.