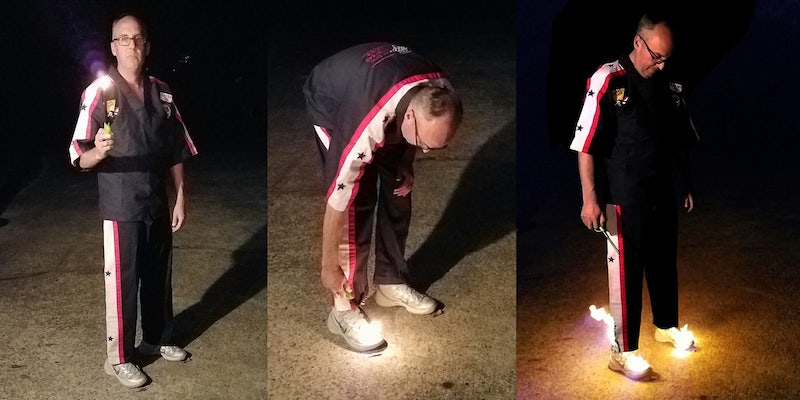 It's just a joke—but it's plausible.

Once Nike announced that it hired Colin Kaepernick as its newest spokesperson, the response from the right was exactly what you’d expect.

Conservatives have frequently destroyed products they’ve purchased after brands and corporation did something that they deemed didn’t display proper fealty to President Donald Trump and right-wing beliefs. So when a man protesting police injustice joined Nike, it was time to get rid of their sneakers.

Almost immediately, one tale stood above the rest: That of the Trump supporter, Mustard, who apparently lit his kicks on fire while they were still on his feet.

He hoped to get country group Big & Rich to retweet his cause.

People on Twitter freaked when the conclusion of this “tale” ended in the hospital.

Unfortunately some peices of the Nike shoes grafted to my feet. Docter says I may lose them anyway so I may just have them amputated #BoycottNike pic.twitter.com/t4xA5kJn2S

People were having a blast with what they thought was a MAGA-head owning himself online.

You’re gonna have a hard time standing for the anthem now paul https://t.co/LnszBW5DtU

The story got a serious boost when a Funny or Die writer. Michael Tannenbaum, tweeted about it.

It took less than 24 hours for a Nike protestor to end up in the hospital.

He burned the Nike Shoes….

But, as dumb as burning things you already purchased is to make a point, there currently isn’t a Trump supporter who went this far. This tale is just a parody. The feet photo is a stock photo found online, and Phil Braun is a writer.

It's fake. Feet photo from here:https://t.co/jev1vDquG9

Tannenbaum also pointed out it was a hoax, but noted that this being considered plausible sums up 2018.

In a Twitter DM to the Daily Dot, Braun, the man behind Mustard, said that the name for his character was a play on Pickles, the child who allegedly sent Trump a note asking how much money he had and that he supports Nike’s decision to hire Kaepernick.

“I am satirizing those on the right who are protesting Nike in this case, by mocking their form of ‘protest,'” he wrote. “The fact that people think this is something that might be real is quite telling about our society right now. My post is really more of a commentary on how stupid I think they are, by pretending to be stupid myself.  I fully support Colin Kaepernick’s right to protest, and support his cause to create dialogue about race.”