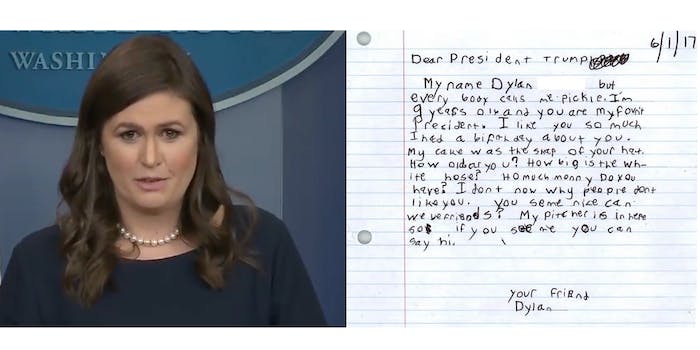 Screengrabs via CNN/YouTube and Olivia Nuzzi/Twitter

Critics are calling the reading of a 9-year-old's letter in a White House press briefing propaganda.

At a press briefing Wednesday, Donald Trump spokesperson Sarah Huckabee Sanders read a letter to the president, allegedly by a 9-year-old fan named Dylan, whose friends call him “Pickle.” Pickle writes that he had a Trump-themed birthday with a MAGA-hat cake and that he doesn’t know why people don’t like the president.

The Pickle gambit did not go over as well as planned: Trump opponents questioned the ethics of using Pickle as a political prop and questioned whether he’s even a real kid.

Congrats, Pickle. You’re a meme. A pickle hasn’t had this much online buzz since one defeated the band Nickelback in a popularity contest.

The typical meme response is a fake letter from another kid with a weird nickname, usually complaining about some heavily Republican issue that only adults over 60 actually care about.

Deer Mr President,
I'm a 9 year old named garp and I wish the lamestream media would be nice too you.
love, garp
ps this is real

Hi mister pwesident, I am 8 years old, do you liek chees also like me? Also plees repeal the Magnitsky Act becas it so bad for good peeple.

This mode of the meme is highly reminiscent of the “woke toddler” trend from the 2016 election cycle when people on Twitter would attribute complex adult political opinions to their young children. Sometimes these were joking, sometimes they were sincere, but they were almost always made-up.

Some other examples of the “Pickle” meme compare the letter to other famous fake letters, like one from Weird Twitter personality Dril and another from the video game Plants vs. Zombies.

U r my favrit premident. I lik ur hat and the way u talk abut making America grate agin.

Ultimately, it’s difficult to prove that Pickle isn’t real. But whether he is or not, the public reading of his letter during a White House press briefing had people talking “propaganda.”