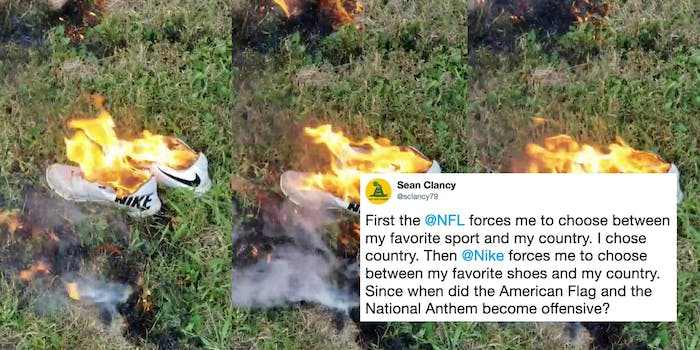 In return, the libs are making fun of them with memes.

Conservatives and NFL fans who abhor Colin Kaepernick and his peaceful protests are destroying their Nike apparel after the company announced that the NFL player would be a face of its Just Do It campaign. In other words, they’re burning their beloved sneakers to own the libs.

Believe in something, even if it means sacrificing everything. #JustDoIt pic.twitter.com/SRWkMIDdaO

On Monday, Kaepernick tweeted an image of himself with the phrase “Believe in something. Even if it means sacrificing everything,” as one of the faces of Nike’s 30th anniversary of the “Just Do It” campaign. Kaepernick, an NFL free agent who previously played for the San Francisco 49ers, began kneeling for the national anthem against police brutality in 2016. Kaepernick is currently suing NFL owners for allegedly working together to keep him from playing.

“We believe Colin is one of the most inspirational athletes of this generation, who has leveraged the power of sport to help move the world forward,” Gino Fisanotti, Nike’s vice president of brand for North America, told ESPN. “We wanted to energize its meaning and introduce ‘Just Do It’ to a new generation of athletes.”

Across Twitter, conservatives are sharing videos of themselves dousing their favorite pair of Nikes with gasoline and lighting the swooshes on fire, rattling off a soliloquy of support for the company’s competitors in the background as their sneakers, and lawns, burn to the ground.

“Hell, I might go buy some Adidas. Hmm, you know how many other sneakers there are to buy? To choose from?” one Twitter user, Sean Clancy, hypothetically asks as he watches his shoes shrink in the fire.

Another Twitter user throws five pairs of sneakers into a fire pit to the tune of the national anthem playing in the background, all because Kaepernick is the “face of Nike” and “doesn’t share the views of the people.”

.@Nike how you going to endorse @Kaepernick7 a person that advertises socks with cops portrayed as pigs, a person that hasn’t played NFL for 2 years, well it’s good I never really spent money on your brand but to the money I did, here they are pic.twitter.com/oHFVgDnR4K

.@Nike Due to your support of C.K. in your coming adds, I as an American can no longer support your company. #boycottNike #IStandForOurFlag pic.twitter.com/5JxSMD8SSO

Others are destroying their Nike merchandise by other means or, at the very least, promising to stop purchasing from the brand in their tweets to the company.

Our Soundman just cut the Nike swoosh off his socks. Former marine. Get ready @Nike multiply that by the millions. pic.twitter.com/h8kj6RXe7j

Despite the hashtag #NikeBoycott being centered around those who have either destroyed their Nike apparel or are threatening to take their business elsewhere, much of the conversation within the hashtag is coming from supporters of the brand’s move to work with Kaepernick. Some have asserted that the backlash around Nike’s partnership signals why Kaepernick felt the need to kneel during the national anthem in the first place—to assert that police brutality against Black people must stop and matter to white fans who only seem to value their team or the brands they patron, and not the Black athletes behind them.

Anyone participating in a #NikeBoycott is proving exactly why #ColinKaepernick was kneeling in the first place: because too many white people value their songs and flags and privilege, above the lives of people of color.https://t.co/b7uTtOsOGH

Others have suggested that if people burning their Nike merchandise really cared about supporting veterans and felt that Kaepernick’s protests, and Nike’s partnership by extension, insulted veterans and the military, then they would have donated their goods to a charity that supports veterans, instead of making an ashen gesture.

Here's an idea. If you think America's veterans deserve more respect, why not donate your clothes to a veterans' charity instead of cutting them up with scissors like a dumb, spiteful little brat? #NikeBoycott

If you burn/destroy clothes and shoes instead of bringing them to a veteran charity, don’t talk patriotism or honoring vets.
You are throwing away something SOMEONE you say you respect needs to be spiteful and look cool on social media.
It proves your outrage a lie.#NikeBoycott

I guess conservatives are done trashing a POW during his funeral and are now back to pretending it's black people who are the unpatriotic ones. #NikeBoycott

A majority, however, appear to be getting their kicks out of the spectacle, responding to the boycotters’ seemingly extreme resorts with tweets parodying the online outrage. No, they’re not actually destroying their Nikes, but they’re pretty good at making fun of the people who are.

I am going to spray paint NIKE on my 1997 Honda Accord and burn it to own the libs. #NikeBoycott

Wow! I am putting all of my Nikes in the garbage disposal!! Working with a peaceful protester is AGAINST MY MORALS!!!! I miss the days when I could proudly support them for their child labor practices like a GOOD AMERICAN!!! WOW

Hey you never should have disinvited Steve Bannon from your festival. My dad was in the navy. Get ready @NewYorker for pictures like this in the trillions pic.twitter.com/1LsR96geE7

One man appeared to set his shoes on fire while burning them, though the tweets are most definitely fake, making fun of those who have.

I'm finally cutting out the Nike logos out of my Nike pillow case! pic.twitter.com/cP9Un6PVzH

Much to the disappointment of Nike’s boycotters, no sneakers were “droned striked” in the making of this next tweet.