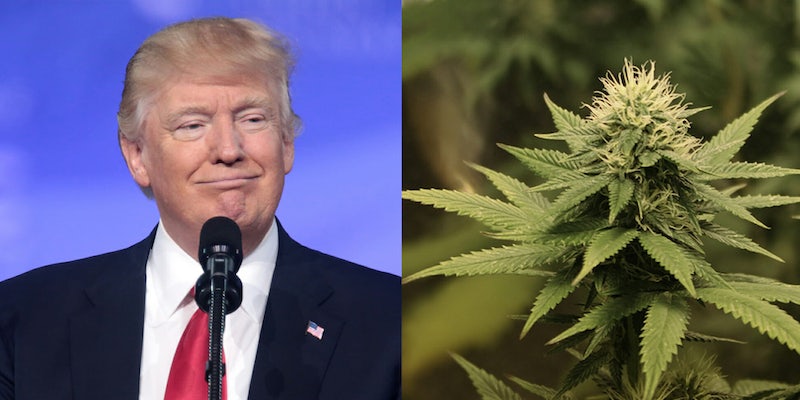 Trump: I will ‘probably’ support a bill that protects states with legal marijuana

President Donald Trump said on Friday that he would “probably” support a new bill that protects states with legalized marijuana from interference from the federal government, according to reports.

The bill, introduced on Thursday by sponsors Sen. Cory Gardner (R-Co.) and Sen. Elizabeth Warren (D-Mass.), would let states that already have legalized pot make their own decisions regarding marijuana and protect businesses from interference or prosecution from the Department of Justice.

“The problem we’ve got right now is that the states can pass their own laws, the way Colorado and Massachusetts have, but the federal government hasn’t changed its law. So that means that anyone who is using marijuana legally under state law is still at risk under federal law, and then that creates all of these crazy fall-out pieces,” Warren said on MSNBC.

Trump appeared to support the measure, according to the Washington Post.

“I know exactly what he’s doing,” the president said when asked about the bill. “We’re looking at it. But I probably will end up supporting that.”

The president’s apparent support for the bill is at odds with Attorney General Jeff Sessions, who has been vehemently against laws that legalize or direct law enforcement to be lax on marijuana. Sessions has claimed—incorrectly—that pot is as dangerous as heroin.

Marijuana has been a hot topic in Congress in recent months. In April, Senate Minority Leader Chuck Schumer (D-N.Y.) said he would introduce a bill that would decriminalize marijuana on a federal level and remove it from the list of scheduled substances.

Schumer’s bill would create funding for minority- and women-owned businesses in the marijuana industry and allow the government to regulate advertisements in a similar fashion that it does for tobacco and alcohol.