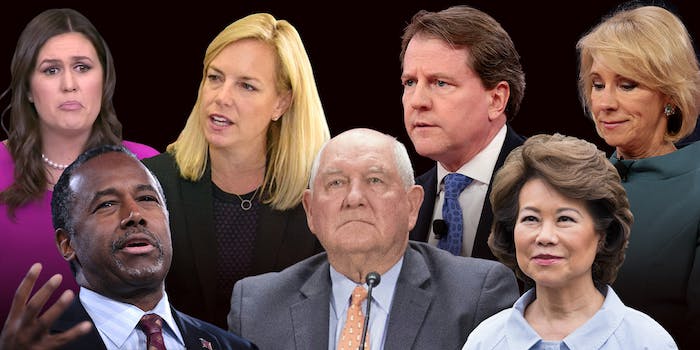 The 7 Trump staffers who just might make it to 2020

Though with this president, you never know.

Almost ever since he took office, Donald Trump’s White House has been beset by firings, resignations, amicable partings, and whatever-the-Hell-happened to Omarosa.

Even after Secretary of State Rex Tillerson departure, there are likely to be more pink slips handed out. The New York Times’ Maggie Haberman tweeted that “people close to the White House say they expect more major personnel shift.”

Several names have been on the watchlist for a while. Most are putting their money on Jeff Sessions, who Trump has repeatedly insulted. At one point, Sessions even tried to resign, according to CBS. Despite denials, John Kelly is also probably on his way out and discussed resigning after the Rob Porter debacle. And a series of ethical missteps have put the Veterans’ Affairs secretary David Shulkin’s job in jeopardy.

In the wake of all these likely departures, let’s take a look at the opposite: The top-name Trump staffers most likely to stay until at least 2020

Unlike most of the dismissed officials, Carson has stayed out of the spotlight and he’s a rare face on television. His department is tight-lipped and there don’t seem to be too many leaks, which typically peeves Trump.

His stances on the issues have been somewhat vague but when Carson speaks, he sounds a lot like the president. When he was first appointed to the HUD post, he blamed racial segregation on “regulations,” a term that Trump also throws out when he’s looking for a scapegoat. And during the campaign, Carson was one of the few candidates to back-up Trump on his wild claim that people in New Jersey were cheering when the Twin Towers fell on 9/11.

DeVos echoes Trump’s talking points whenever somebody sticks a microphone in front of her and she’s almost never on television. She supported Trump’s controversial decision to pull out of the Paris climage agreement and during a 2017 speech at CPAC, she railed against the “education establishment in Washington” before promising to “make American education great again.”

She does manage to get a lot of press because of the frequent protests at her public appearances, but those incidents are never covered on Fox, so there’s a good chance that Trump knows nothing about them. Additionally, DeVos paid for her position: her family has padded the war chests of every important politician in the Republican party, meaning that unlike some of the other Trump officials, she has a lot of support on the Hill.

During his infrastructure pushes, she’s been a constant supporter. On Twitter, she announced, “the President’s infrastructure agenda will create good paying jobs for America’s working families.”

She’s failed to offer many specifics of Trump’s infrastructure plan while wholeheartedly backing the Oval Office, which means she’ll likely be behind Trump regardless of what his final decision looks like. She even suggested that the private sector should invest in infrastructure, a point that’s sure to please the real estate mogul-turned-president

Sonny Perdue might be the least-known member of Trump’s cabinet. The last time you heard his name was probably during the State of the Union, when he was the designated survivor.

He’s a former governor, so it looks good for Trump to have him in the cabinet. Throwing him out the door would be an unnecessary headline. On policies, Perdue is a Trump warrior, he’s remade the USDA by cutting regulations in some pretty incredible ways, including working to revoke a 2015 initiative on clean water. His quiet but widespread power led Bloomberg to term him “the most aggressive enforcer of President Donald Trump’s pro-business and deregulatory agenda that the fewest Americans have ever heard of.”

In her policies, Nielsen took up one of Trump’s most controversial battles: his fight against immigration. Immediately after she assumed the role, she urged Congress to “provide the funds needed to build the wall.” And she regularly supports his immigration policies, even saying recently that Trump’s policies “more effectively combat human trafficking.”

Like all good Trump cabinet members, Nielsen stays out of the spotlight. She reportedly wasn’t well-liked when she was first appointed but she’s following the leader well, so we can’t see a reason that Trump would give her the boot.

Additionally, she seems to balance Trump pretty well and relates to him in a weird but effective way. When you do spot the president and Sanders together, one of them is almost always smiling and she’s pretty good at her job.

Don McGahn isn’t technically a cabinet member either, but he’s a big name in the West Wing, so we thought we’d include him. McGahn handles the legal issues of a White House that has found itself in more than a few tight spots. Unfortunately, his job is probably about to get a little harder as Robert Mueller prepares to interview the president.

McGahn did run into a snag in June when Trump considering firing special counsel Robert Mueller. During that rocky period, he threatened to resign before eventually staying on. McGahn’s even weighed in on policies, and spoke at CPAC, where he promised that Trump’s plan will clear up pesky regulations.

McGahn tries to stay out of the spotlight enough to keep Trump happy and the president really seems to like him. We can’t find a reason that Trump would part ways with his in-house attorney.