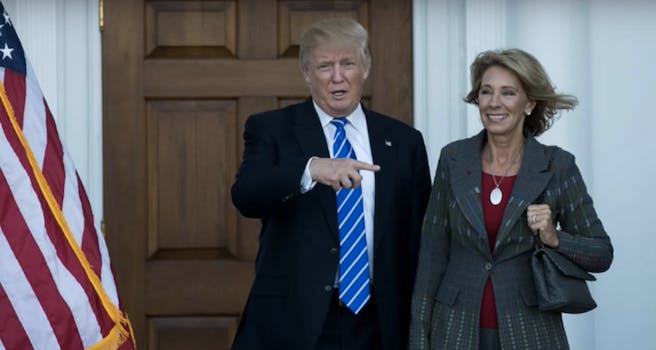 6 things to know about Betsy DeVos, Trump’s pick for secretary of education

President-elect Donald Trump has picked a school-choice activist, Betsy DeVos, to be the secretary of education. Who is she? Here’s what you need to know.

1) She was not a Trump enthusiast

DeVos is a billionaire who has been involved in the Republican party as a top donor and served as the state Republican Party chair in Michigan. She financially supported Carly Fiorina, Jeb Bush, and ultimately decided to support Marco Rubio in the primaries. In March, she told the Washington Examiner that Donald Trump did not represent the Republican party.

“I continue to be very optimistic that as we get further along into the process, the more voters know about him, and the more informed they are, the more they’re going to continue to break away,” DeVos told the Examiner.

Today her stance is different.

I am honored to work with the President-elect on his vision to make American education great again. The status quo in ed is not acceptable.

2) She has ties to pro-Common Core organizations

The Common Core is a set of state standards that detail what K-12 students should know at the end of each grade in mathematics and English language arts. DeVos is a former board member of the Foundation for Excellence in Education, a group led by former Florida Gov. Jeb Bush, that promotes school choice and the Common Core education standards.

During his campaign Trump vowed to eliminate the Common Core education standards, and although DeVos has ties to such organizations, she has clarified she is not a supporter herself.

“I am not a supporter,” her website reads. “I do support high standards, strong accountability, and local control.”

“Her allegiance is to families, particularly those struggling at the bottom of the economic ladder, not to an outdated public education model that has failed them from one generation to the next,” Bush wrote on Wednesday.

4) She chairs the American Federation for Children

It’s a group that promotes charter school education and are pro-voucher advocates. DeVos believes all parents, especially those from low income families, should be able to choose the best education for their children by being able to use tax dollars to pay for private and charter schools. Trump has proposed redirecting $20 billion dollars for the expansion of vouchers and charter schools.

5) She’s a former board member of the John F. Kennedy Center for the Performing Arts

From 2004 to 2010, DeVos supported training for arts leaders across the United States. In 2010, the DeVos family gave $22.5 million toward the DeVos Institute of Arts Management, a program which would provide development seminars, coordinate international fellowships, and free consultation to non-profit performing arts groups.

6) She does not have the National Education Association’s support

“We will continue to fight for every student’s right to a great public school & against any attempts to undermine opportunity,” Garcia tweeted.

According to a statement released by Garcia, vouchers are a part of DeVos’ failed schemes that work to take away funding and local control from public schools.