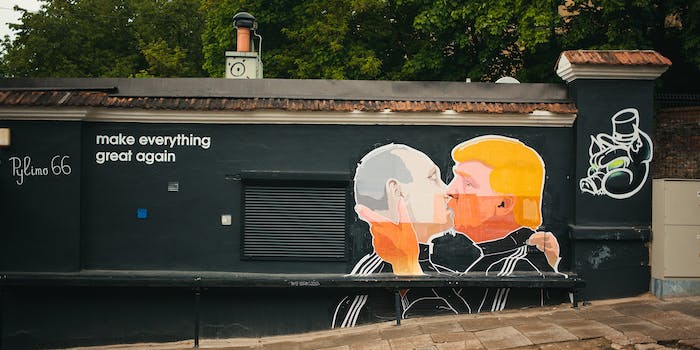 Breaking down the big news on Trump and Russia

Is this a bombshell or a dud?

An explosive finale of breaking news shot into the ether Monday night, as a trio of reports exposed an FBI inquiry into Donald Trump’s potential ties to the Russian government a week before Election Day.

The news is either a bombshell or a dud depending entirely on the reports you read, however. One thing is clear: The FBI took seriously allegations that the Republican presidential nominee had ties to Moscow. But is there anything substantial that should give undecided voters cause for concern? The short answer is apparently no—but it’s not quite that simple. Let’s break it down.

“The irregular pattern of server lookups actually resembled the pattern of human conversation—conversations that began during office hours in New York and continued during office hours in Moscow,” wrote Foer. “It dawned on the researchers that this wasn’t an attack, but a sustained relationship between a server registered to the Trump Organization and two servers registered to an entity called Alfa Bank.”

The expansive report goes on to explain how the server mysteriously went offline after New York Times reporters began asking about the server, then came back online with a new name and was quickly contacted by the Alfa servers.

The report is not in any way conclusive, but it leaves open the possibility that Trump is somehow communicating with Russia—a fact that Democratic nominee Hillary Clinton’s campaign was eager to point out.

It's time for Trump to answer serious questions about his ties to Russia. https://t.co/D8oSmyVAR4 pic.twitter.com/07dRyEmPjX

Soon after Clinton tweeted the Slate story, the New York Times published a more sober report, declaring that “none of the investigations so far have found any conclusive or direct link between Mr. Trump and the Russian government. And even the hacking into Democratic emails, FBI and intelligence officials now believe, was aimed at disrupting the presidential election rather than electing Mr. Trump.”

More importantly, the Times piece, which is based on anonymous sources, shot down speculation that the Trump Organization server communicating with Alfa Bank was anything more than an inconsequential blip:

FBI officials spent weeks examining computer data showing an odd stream of activity to a Trump Organization server and Alfa Bank. Computer logs obtained by the New York Times show that two servers at Alfa Bank sent more than 2,700 “look-up” messages—a first step for one system’s computers to talk to another—to a Trump-connected server beginning in the spring. But the FBI ultimately concluded that there could be an innocuous explanation, like a marketing email or spam, for the computer contacts.

So, ok. This is all a very exciting story, but it is almost entirely smoke when you actually dig into it. https://t.co/aorvPnX03L

So we have a Trump server communicating with a powerful Russian bank—but the FBI thinks it’s nothing. That, or the FBI wants to downplay this part of its investigation because it’s apparently still ongoing. This theory could play into earlier reports that FBI Director James Comey did not want to add the Bureau to the list of U.S. intelligence agencies publicly blaming Russia for hacking Democratic Party organizations because it was too close to Election Day. But all we really have to go on is reports saying the FBI dismissed the Trump–Russia connection.

Then there’s the Mother Jones article.

Based on memos from and conversations with an unnamed “former spy” from a Western nation, reporter David Corn details evidence that Trump has had a direct relationship with Russia’s government for the past five years.

One of the former spy’s memos reads: “Russian regime has been cultivating, supporting and assisting TRUMP for at least 5 years. Aim, endorsed by PUTIN, has been to encourage splits and divisions in western alliance.” Further, the memo claims, Trump “and his inner circle have accepted a regular flow of intelligence from the Kremlin, including on his Democratic and other political rivals.”

The biggest tidbit, however, is that Russian intelligence “compromised” Trump when he visited Moscow and could “blackmail him” if he didn’t cooperate.

Trump has of course repeatedly and insistently denied having any connection to Russia—a claim the FBI appears to agree with.

So, we have unnamed cybersecurity experts concerned about mysterious communications between a Trump server and a Russian bank, unnamed law enforcement officials telling the Times that the FBI hasn’t found any damning link between Trump and Russia, and an anonymous former spy claiming that Trump is, as Clinton put it during the final presidential debate, a puppet of Vladimir Putin.

If this is the primary issue informing your vote, well, good luck.