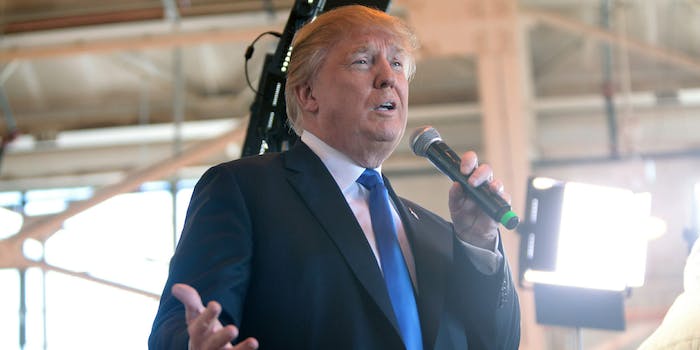 Trump has repeatedly attempted to discredit the DOJ investigation.

President Donald Trump quoted a Fox News reporter in a series of Thursday morning tweets to attack the ongoing probe into Russia’s interference in the 2016 election and the press.

Trump has repeatedly aimed to cast doubt on the validity of the Department of Justice investigation despite the United States intelligence community confirming that Russia attempted to influence the American election. The president has called the investigation a “witch hunt” and “fake news.”

On Thursday, the president continued that trend by directly quoting a Fox News reporter and saying the press was “purposely” publishing fake news.

“‘One of the things that has been lost in the politics of this situation is that the Russians collected and spread negative information…,” Trump wrote on Twitter. “…about then candidate Trump.’ Catherine Herridge @FoxNews. So why doesn’t Fake News report this? Witch Hunt! Purposely phony reporting.”

"One of the things that has been lost in the politics of this situation is that the Russians collected and spread negative information…..

The tweets come as the investigation appears to be ramping up. Earlier this week, Trump’s adviser and son-in-law Jared Kushner said he “did not collude” with Russia following revelations that he met with a Russian lawyer during the campaign who promised compromising information on Hillary Clinton.

Donald Trump Jr. and former campaign chairman Paul Manafort also attended the June 9, 2016, meeting and have been called to testify before Congress as a result.

At the same time, Robert Mueller, the special counsel appointed to oversee the Russia investigation, is reportedly looking into the Trump family’s finances as part of the probe.