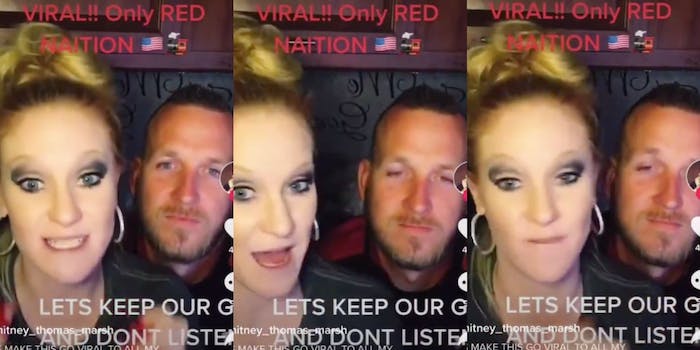 'And it will only just be us; we don't have to worry about Democrats.'

A TikTok video captured President Donald Trump supporters proposing that the outgoing Trump run for governor in an unnamed state, where all his supporters can live in a virtual Trumptopia.

On a now-hidden or closed account going by @whitney_thomas-marsh, a couple pitched an idea they hoped would make it from their mouths to Trump’s ears.

One person commented that she would be willing to give up a state for transformation to Trumptopia.

The video was picked up and commented on by @coachjackson08, who had bad news for those Trumpers.

He quips, referencing Jim Jones and Trumpism as a cult: “Jonestown 2.0, huh?”

Jackson decides to play along and run down the “Trump run for governor” scenario, setting aside the idea’s ludicrousness. He first mentions they would need to locate a state willing to participate in Trumptopia.

He talks about the population going down in the state, as well as tourism because he believes “no one is gonna want to visit your state.”

At the moment, Trump and his base are having difficulty coming to grips with the loss. As he continues to fight the election results, “numerous people close to him are expressing concern that he’s spiraling into rage and hurting his own legacy, as well as the Republican Party,” per an NBC report.