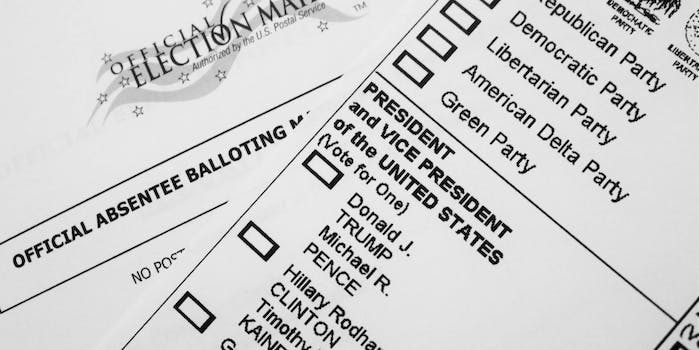 There is still no evidence for the claim.

A new poll finds that one in four voters agree with President Donald Trump’s unsubstantiated assessment that voter fraud drastically impacted the 2016 presidential election—but most people believe that it was Trump who gained from alleged illegal voting.

The opinion poll conducted by Politico/Morning Consult took place between Jan. 26 and Jan. 28, in the days after Trump’s latest assertion of election rigging, and registered 1,991 participants. It found that 25 percent of those surveyed believed that millions of illegal votes were cast—but 35 percent say they were cast in Trump’s favor, compared to 30 percent who believed they aided Democratic nominee Hillary Clinton. Unsurprisingly, opinion was divided along party lines.

Without providing any evidence, Trump has repeated claims that around 3 million to 5 million illegal votes were counted for Clinton. Coincidentally, Clinton won the election’s popular vote by nearly 3 million votes, although she lost the Electoral College.

In the early days of the new presidency, the Trump administration announced it would pursue an investigation into the matter, but Republican Congress pushed back last week.

“On the voter fraud issue, that really happens at the county level. I don’t see any evidence,” Rep. Jason Chaffetz (R-Utah), the chairman of the House Oversight Committee told reporters. “But the president has 100,000 people at the Department of Justice and if he wants to have an investigation, have at it. I just don’t see any evidence of it. … The Oversight Committee is not planning to do anything with it.”

With no proof, this is the prevailing verdict—that voter fraud on the scale Trump alleges did not take place. Yet the White House stands by the president.

When challenged by journalists at a press conference to explain the evidence the president was basing his assertion on, Press Secretary Sean Spicer passively dismissed the question.

“As I said, I believe the president has believed that for awhile based on studies and information he has,” Spicer said.

The poll also found that 49 percent of respondents approve of the job Trump is doing as president, compared to 41 percent who disapprove—a jump compared to other recent polls. Trump’s overall favorability sat at 49 percent with 44 percent rating him unfavorably.