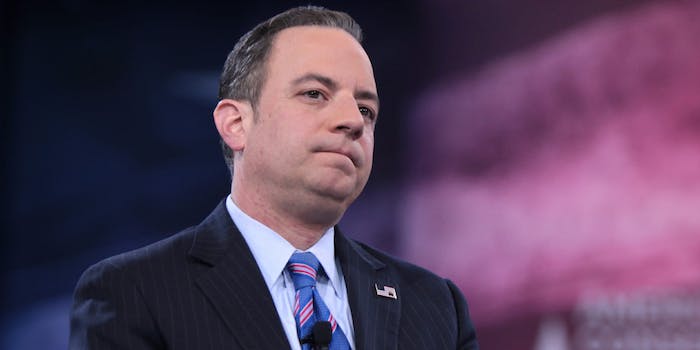 Reince Priebus pushed out as Trump’s chief of staff

Priebus' ouster has been simmering for days.

The White House shakeup continued on Friday, as President Donald Trump announced that he had replaced Reince Priebus as chief of staff.

Priebus resigned on Thursday night, reports the New York Times, just as the Senate prepared to vote on a repeal of Obamacare, which ultimately failed. On Friday evening, Trump announced that he has appointed Gen. John Kelly as Priebus’ replacement. Kelly was serving as Trump’s director of homeland security prior to his job change.

I am pleased to inform you that I have just named General/Secretary John F Kelly as White House Chief of Staff. He is a Great American….

…and a Great Leader. John has also done a spectacular job at Homeland Security. He has been a true star of my Administration

I would like to thank Reince Priebus for his service and dedication to his country. We accomplished a lot together and I am proud of him!

Priebus’ ouster has been expected since Trump appointed Scaramucci last week. The former chief of staff reportedly opposed Scaramucci’s appointment, as did Sean Spicer, who resigned as press secretary as a result of Scaramucci taking over as communications chief.

In a profanity-filled tirade while speaking to the New Yorker‘s Ryan Lizza on Wednesday, Scaramucci  said Priebus—whom he called a “paranoiac”—would “be asked to resign very shortly.”

Priebus formerly served as chairman of the Republican National Committee (RNC), while Spicer is the former RNC communications chief. The pair’s absence pushes Trump’s White House further away from the Republican establishment.

Trump’s announcement that he had replaced Priebus with Kelly came just moments after news broke that Scaramucci’s wife, Deidre, has filed for divorce, allegedly due to his “naked political ambition,” according to the New York Post.

With Kelly, a four-star Marine, now out as head of Homeland Security, it remains unclear as of publication who will take over that top national security post.