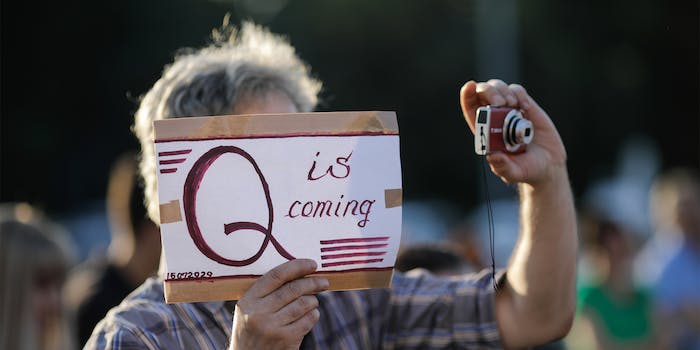 For a super secret military insider, whoever posts as QAnon sure gets duped a lot by random internet hoaxes.

The QAnon conspiracy cult has spent the last year morphing into a giant circus tent for virtually every fringe movement one can imagine. Coronavirus truthers happily mingle with anti-vaxxers, while sipping virtual drinks with people who think Bill Gates wants the entire population branded with 5G, internet-activated tattoos, all plotting to save children from non-existent vast elite pedophile rings.

But through all of its various new guises, QAnon is still about the same thing it’s always been—a troll pretending to be a military intelligence insider revealing supposed hidden connections between all of the different tentacles of the deep state. Whatever the identity of that troll turns out to be (assuming we ever actually find out in a way that can be proven), the Q movement takes its prompts from what that person says. When Q mentions something, Q followers research it. When Q says something is real, Q believers think it’s real.

One would assume, then, that whoever the Q poster actually is, they’d have built their massive and growing following through access to the highest and most disturbing secrets in the government, backed up by a bulletproof track record of research that reveals to Q followers exactly what’s going on, how it’s being hidden, and what we can do about it.

One would be wrong.

Q, in fact, has a ridiculously bad track record of failed predictions, vague claims of events to come that never take place, wild stories that have no supporting evidence, and a unique ability to “foresee” things that either have already taken place or were extremely obvious to anyone paying attention. But even more than that, the “super-secret military intelligence team” that makes up Q has been fooled by hoaxes that fell apart on even the slightest examination. Even worse, there are multiple instances of Q clearly attempt to trick their own following with faked pictures and stories—then trying to explain it away as trolling when they get caught.

Most recently, Q got badly taken by a fake story, and tried to cover their tracks with a lecture to followers. In drop 4797, posted Sept. 30, Q rhetorically asked “do you believe in coincidences” while showing off the headline of a bombshell story about James Comey’s daughter supposedly inspecting “missing” footage of Jeffrey Epstein suicide—and Comey’s daughter’s husband prosecuting Epstein madame Ghislaine Maxwell. All part of the nepotism that fuel’s the cabal’s constant covering for its own members, right?

Except the story, watermarked as published on “The Washington Pundit,” was fake. Comey’s daughter Maureen Comey was an Assistant U.S. Attorney in the Southern District of New York (SDNY), and as such, was one of the lead prosecutors on the Epstein case. And there was footage taken at the Manhattan Correctional Center of activity near Epstein’s cell before he attempted suicide—but it was his unsuccessful July 23 attempt, not his actual suicide the next month. But the MCC claimed that footage was lost due to technical errors—a discovery that only became public record thanks to a court filing co-written by Maurene Comey herself. By the time of Epstein’s second, successful attempt, those cameras were no longer functioning.

It’s certainly believable to say that they could have been disabled as part of a cover-up by someone to kill Epstein and make it look like a suicide, but it still doesn’t change the fact that there is no footage of that attempt for Maureen Comey or anyone else to review. The other part of the fake post that suckered Q is that Comey’s husband Lucas Issacharoff is “doing” Maxwell’s prosecution. This is also false—he joined the SDNY’s office as a prosecutor in September 2019 and works in the office’s civil division according to his LinkedIn profile, not the criminal division. Conspiracy theories notwithstanding, he’s got no link to Maxwell.

These simple facts, that Maureen Comey never saw footage of Epstein’s suicide because it doesn’t exist, and that her husband has nothing to do with prosecuting Ghislaine Maxwell, were apparent almost immediately. So Q tried to cover up that they’d been had by a fake story from a fake news site, writing two days later:

Do not take the bait.

Of course, this makes absolutely no sense, because it was Q who re-posted the image as a real thing after someone else had already posted it on 8kun as a real thing. Wouldn’t that mean Q put the bait out for Q followers to take? But in Q land, things don’t need to be plausible, they just need to be plausible enough to be waved away as disinformation.

And it’s happened before. On April 8, Q was duped by the “Cannibal Club” hoax, posting a link to a website that supposedly advertises a restaurant in Los Angeles that serves actual human meat and rhetorically asking if “spirit cooking” was pretend. Of course, no such restaurant exists, and the “Cannibal Club” is a hoax by the fake news site Your News Wire—a hoax that was debunked several years earlier.

While a number of Q believers on 8kun went with it, expressing their outrage at the deep state pedophile elite’s latest horror, not everyone bought it. “For the first time, I think we are getting larped,” wrote one anon on 8kun shortly after the post went up.  “My heart dropped as I know I saw this before and it is not real. We are doomed. I have been fooled for 3 years by this. I feel like my heart was just ripped out.”

Once again, Q did damage control shortly after the fakery was revealed, writing in a drop the next day

“How do you hide the truth?

But anyone who took Q seriously should have been disturbed by someone who claims to be a highly placed figure in the shadowy world of secrets being so thoroughly fooled by stock photos and an obviously fake website – a fake that would have been figured out if Q had bothered to carry out even one Google search.

To go back even farther, Q fans should have stopped taking Q seriously around July 5, 2018—the date that Q put up a picture they had supposedly taken of the inside of Air Force One, trying to offer proof that they were so close to President Donald Trump that they actually traveled on his plane.

But Q doesn’t actually travel on Air Force One. That photo was a cropped and rotated part of a still frame of a documentary about the president’s plane during Barack Obama’s time in office—a fact easily proven because the photo is also in an ABC News gallery posted on May 6, 2015. It was obviously cropped and photoshopped by Q to “prove” they were who they claimed to be, only to reveal that they weren’t at all.

Anons immediately caught the mistake, and naturally, Q went straight into damage control, writing that “trolling is fun” while also trying to justify the idea that the picture taken during the Obama years could have just as easily been taken during the Trump years because the plane interiors were “identical” other than “small changes.” Q then stopped posting for almost three weeks.

These three incidents show off a “high-level insider” who is so prone to making mistakes and getting taken in by frauds that they have an almost standard procedure for cleaning up the mess they make afterward. Or even worse, they show that Q is actively trying to fool their own followers with fakes and hoaxes. Maybe because Q followers constantly prove how easy they are to fool.

Putting aside all of the other failed predictions and proclamations that the great purge of the deep state will be “soon” or “next week” only for nothing to happen, these failures make it absolutely clear that whoever makes the Q posts—whether it’s 8kun owner Jim Watkins as some Q watchers believe, someone linked to him, or someone else entirely—they are easily duped by viral hoaxes, something that seems to run counter to the notion of a secret military expert running a precision op.