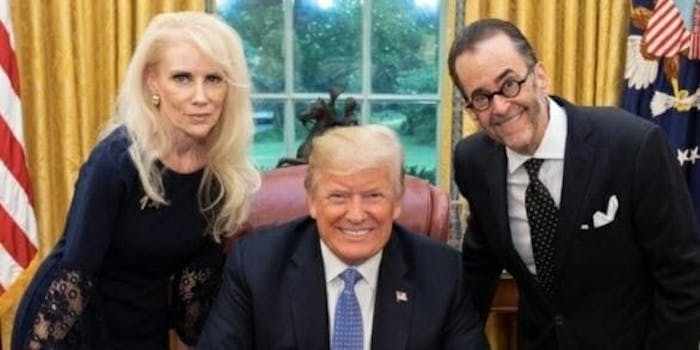 Trump hosted a QAnon conspiracy theorist at the White House

The latest in the Trump-QAnon saga.

President Donald Trump met with a leading supporter of the QAnon conspiracy theory at the White House on Thursday.

An Instagram post showed the president flanked by Lionel Lebron and his wife, Lynn Shaw, with the caption, “There are simply no words to explicate this profound honor.”

Lebron, whose real name is Michael Lebron according to his Facebook page, propagates QAnon theories through his YouTube channel, Lionel Nation.

Lebron said in a video posted Friday that he didn’t ask the president about QAnon but claimed, “I would never ever want to be known as somebody who would connect” Trump to the conspiracy theory. “I think we all know he knows about it,” Lebron added.

The theory chiefly claims that Democrats are part of a global cabal of pedophiles who control world events. According to adherents, Q is someone, or a small group of people, high up in the government who will eventually expose the supposed crimes of Democrats. Some think that Q is John F. Kennedy, Jr.; others think it’s Trump himself.

The conspiracy theory first surfaced in October 2017 and came to a head in late July, when supporters wearing QAnon gear showed up at a Trump rally in Tampa.

Trump has never condemned QAnon and is known to ascribe to conspiracy theories, like the one that claimed Barack Obama was not born in the United States. The “special tour” and photos with Lebron only serve to legitimize QAnon in the eyes of its followers.

Lebron has been in the broadcast business in some form or another for decades, according to his website; he started by calling into radio shows in his native Florida. His lengthy bio claims that he used “a host of voices and accents, thus carpet-bombing the Tampa Bay airwaves.”

But with the advent of the internet, Lebron and his QAnon tales are reaching more people than ever; a recent video on microchips being implanted in humans racked up 23,000 views.

Neither Lebron nor the White House responded to requests for comment by press time.