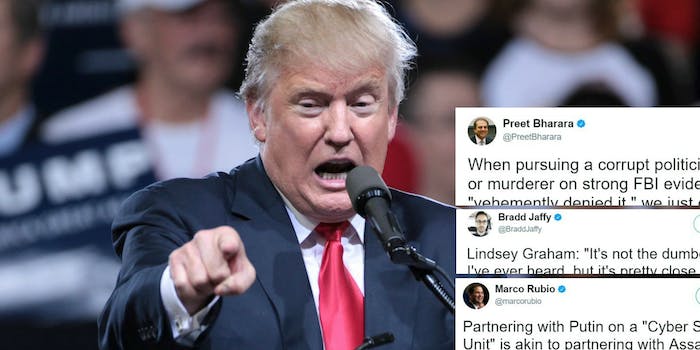 Following his G20 Summit meeting with Russia President Vladimir Putin, Donald Trump returned to Twitter on Sunday morning, proclaiming that he would begin working with Putin on cybersecurity.

Much of the internet, including a number of GOP lawmakers, had an immediate response, and almost none of it was positive.

While reality & pragmatism requires that we engage Vladimir Putin, he will never be a trusted ally or a reliable constructive partner. 1/3

We have no quarrel with Russia or the Russian people. Problem is with Putin & his oppression, war crimes & interference in our elections 1/3

Rubio’s criticism was eclipsed by the vitriol shown by Sen. Lindsey Graham (R-S.C.).

Lindsey Graham: "It's not the dumbest idea I've ever heard, but it's pretty close." #MTP https://t.co/KnesBVlre1

.@SenJohnMcCain says he's sure Putin could be of assistance in Trump's effort to prevent election hacking "since he's doing the hacking." pic.twitter.com/faTQEsm3Lq

Other non-Republican senators also weighed in on Trump’s desires, and not many of those tweets, whether they were from journalists or a former U.S. attorney, agreed with the president.

Trump: Did you take the cookie?
Child: (covered in crumbs, chocolate on face) I did not
Trump: Good enough for me https://t.co/Q7PKtH0ftF

When pursuing a corrupt politician, mobster or murderer on strong FBI evidence, if he "vehemently denied it," we just dropped it usually. https://t.co/d4HqyHQexB

Trump will feud with someone forever over a personal slight, but if you violate the nation's sovereignty, let's let bygones be bygones. https://t.co/cgfOYWSt1A

Good news, everyone. I was robbed last night. But I confronted the robber and he agreed to set up a joint robbery task force with me.

Bush: Did you destroy our Towers?
Bin Laden: No.
Bush: Ok I believe you. We shall build an anti-terrorism unit together to stop attacks.

A cyber security working group with the very perpetrators of the attack on our election? Might as well just mail our ballots to Moscow. pic.twitter.com/RjbhhI4MTw

Not everybody, though, disagreed that Trump’s plan to partner with Putin was a bad move. For instance, former campaign manager Corey Lewandowski said that after Trump discussed the issue with Putin—and remember, Putin said Saturday that Trump agreed with Russia’s denial that it had meddled in the presidential election—the Russia story is now over.

Considering Trump is still under numerous investigations, Lewandowski’s statement is likely just wishful thinking, even if Trump’s heart really is set on working with Putin.