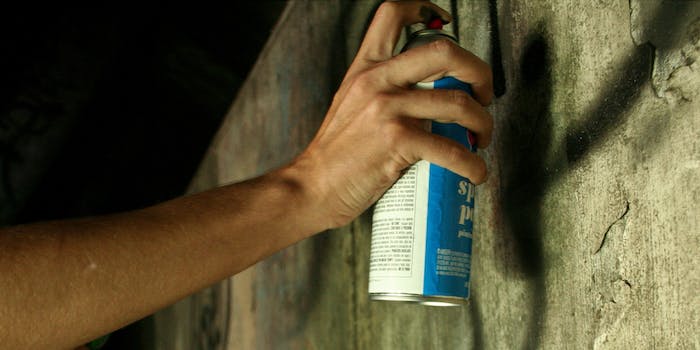 Is the mental image of Donald Trump furiously making out with Vladimir Putin what you see when you close your eyes?

Sorry. The world is a cold, twisted place, and this is one of our endless collective punishments for the paradoxical privilege of mere existence. So, also, not sorry.

The above image is a piece of graffiti art painted onto a wall in the Lithuanian capital of Vilnius that recently went viral on social media. Here it is again.

Dominykas Ceckauskas, the owner of the restaurant on which the mural was painted, told AFP that he commissioned the artwork as a commentary on the state of U.S.–Russian relations. “It seems we have a new Cold War, and America may have a president who seeks friendship with Russia,” Ceckauskas said. “We see many similarities between these two ‘heroes.’ They both have huge egos, and it’s amusing to see they are getting along well.”

After Russia’s invasion of Crimea following a popular uprising in Ukraine that toppled the pro-Russian government of Ukrainian President Viktor Yanukovych, relations between the former Cold War foes has turned especially frosty, with the Obama administration imposing economic sanctions aimed at a number of close Putin allies.

Trump, the Republican party’s presumptive presidential nominee, has repeatedly praised Putin. In an interview on MSNBC’s Morning Joe late last year, Trump commended Putin’s leadership skills when asked about a string of murders of journalists in the country that many be linked to the Russian president.

For his part, Putin called Trump, “a really brilliant and talented person.”

Both of these statements read either as opportunistic efforts to subtly jab Obama’s leadership abilities or adorable trans-Atlantic flirting.

This graffiti’s appearance on a wall in Lithuania, where skepticism of Putin is particularly high, isn’t especially surprising. Fears of Russian military action has become pervasive in the Baltic states following the invasion of Ukraine.

“If we will allow him to go, he will go anywhere. The problem is that Putin’s Russia today is ready and willing to go to war. Europe and the West are not ready and not willing to go to war,” Lithuanian President Dalia Grybauskaite said in a 2014 interview with the Washington Post. “There is no leadership in Europe or in the world able to stop Putin. Afterwards, we will be surprised that new territories are taken, that new countries are partitioned, and it will be a lot more costly and too late maybe to solve it.”