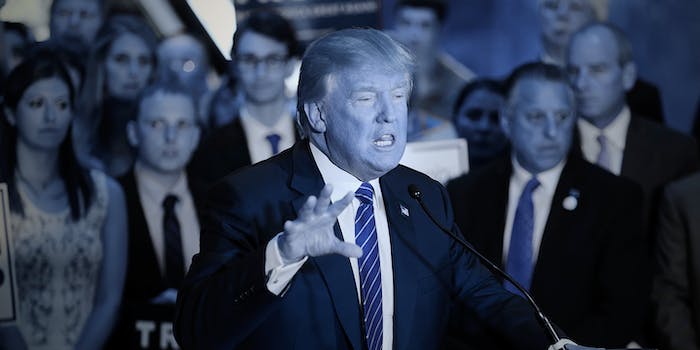 Some protesters chained themselves to cars.

Anti-Donald Trump protesters have shut down a road that leads to a Trump rally taking place in Fountain Hills, Arizona today.

NBC news correspondent Jacob Rascon has been livetweeting the protest.

Trapped drivers starting to get out of their cars, clash with protesters blocking main road leading to Trump event pic.twitter.com/rmNzblA0hN

Deputy arrives and tells protesters to leave, they're not listening. Deputy calling for backup. pic.twitter.com/kEwCg9tNVg

Protesters say getting their cars towed was part of the plan. Three layers of cars. Going to be a while. pic.twitter.com/4Nk6oLe8Xc

Three protesters cabled themselves to their cars, delaying deputies who are trying to tow them pic.twitter.com/Z4KCQMTCa0

This follows up Friday’s Trump rally in Salt Lake City, during which protesters reportedly blocked doors to the venue. Trump’s Saturday rally went on as scheduled.

Arizona Gov. Jan Brewer is introducing Donald Trump in Fountain Hills. "This is so fabulous," she says of the crowd.

Update 3:58pm CT, March 19: A statement from #UnitedAgainstHate emailed to the Daily Dot outlines the reason for today’s protest:

In a protest against the violence and anti-immigrant views promoted by Donald Trump, a multiracial coalition of immigrant rights, faith, labor and local activists peacefully rallied as well as shut down both of the main roads leading to the event to stand #UnitedAgainstHate.

They point to the Trump effect as cause for a package of anti-immigrant laws being proposed in Arizona’s statehouse – including those sponsored by the husband of Linda Kavanagh, the Mayor of Fountain Hills where the Trump rally was planned.

“In Arizona we’ve heard Trump’s hate before and we know where it gets us,” said Carlos Garcia, Executive Director of Puente Arizona in reference to the 2010 SB1070 that cost the state $200 million after a boycott and caused international embarrassment as the state became synonymous with racism. “The Trump effect isn’t just about a candidate. Trump’s ugly rhetoric is being turned into policy proposals as we speak that threaten the wholeness of our families and the safety of our communities. All people of conscience have to unite to stop it.”

“People will not sit quietly as Trump campaigns to move us back in the shadows, to the back of the bus, or back in the closet,” adds Marisa Franco, director of Mijente, a national hub for Latino organizing involved in the protest today. “The greatest act of love we can show is to shut down hate where it rears its head and demand that we do better than the cheap politics and false solutions that Trump is peddling. The billionaire may want to pit poor people against each other but our necks are not available for standing on.”