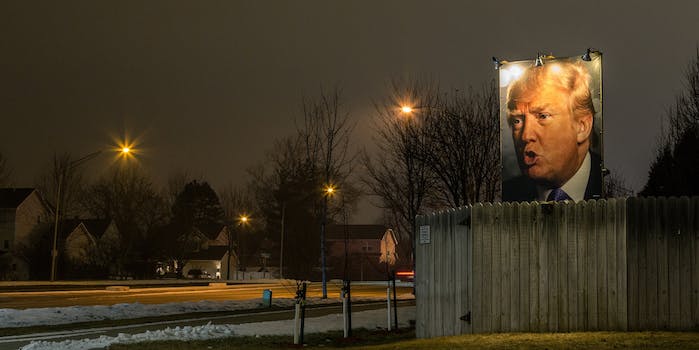 'His expression captured me.'

President-elect Donald Trump‘s win has inspired tens of thousands of Americans to take to the streets, but one of them has stood out above all the rest.

"If he builds a wall, I’ll grow up and tear it DOWN"

The unidentified boy was captured in the photo above on Saturday by Los Angeles photographer Abigail Gordon. “His expression captured me,” she wrote on Flickr, “and it was both sad and heartwarming to see this little boy walking independently amongst adults. I thought it was worth sharing.”

Gordon was not the only person to capture the boy, who has struck a chord with people on social media.

"If he builds a wall, I'll grow up and tear it down" – inspiring photo from the LA protests today. #dumptrump #NotAMandate #LoveTrumpsHate pic.twitter.com/iK4skbrq33

Protests against Trump, who successfully ran on a promise to deport millions of undocumented immigrants and to build a wall along the U.S.–Mexico border, have endured for days in Los Angeles, where Latinos narrowly outnumber whites. On Monday, high school students across the city staged walkouts in protests against Trump’s presidency.

While protests against Trump further expose the harsh divisions among Americans, photos like the one of the boy above serve as a reminder of our common humanity, no matter which side of the wall you stand on.