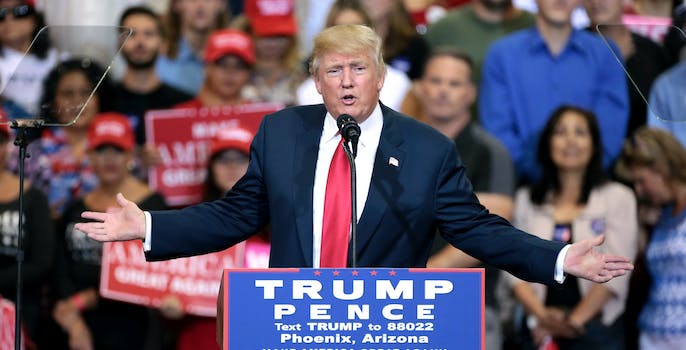 In the wake of back-to-back mass shootings in the U.S. over the weekend, calls for America to address gun violence came not only from the left but those on the right, too.

This morning, President Donald Trump tweeted he was also in favor of reforming gun laws. But the way he did it left a great number of people appalled.

We cannot let those killed in El Paso, Texas, and Dayton, Ohio, die in vain. Likewise for those so seriously wounded. We can never forget them, and those many who came before them. Republicans and Democrats must come together and get strong background checks, perhaps marrying….

….this legislation with desperately needed immigration reform. We must have something good, if not GREAT, come out of these two tragic events!

It’s not just that gun reform and immigration are two of America’s most intractable debates, making the idea of passing some joint grand compromise seemingly impossible, it’s that the mass shooter in El Paso, Texas, had an explicitly anti-immigration agenda.

Trump’s preference for white immigrants over migrants of color, drastically reducing the number the U.S. accepts, and desire for a border wall has shown immigration reform looks like from this president. And it is those same attitudes that were on display in a manifesto posted by the El Paso shooter. He rampaged through a Walmart to kill immigrants.

As many on social media noted: The president is effectively saying, give him what he wants, and we’ll work to get gun control reform.

It’s a sentiment a number of people found abhorrent.

Why would immigration reform be a response to an American terrorist killing people in an American city after ranting about immigrant "invaders"?
It makes no sense. Unless, of course, you think the terrorist had a point. https://t.co/q8X5GSwWA0

After the 2015 Pulse Nightclub shooting, Trump said: See, I told you so! We need a Muslim ban!

After this weekend's El Paso shooting, Trump has said: See, I told you so! We need to keep Hispanic immigrants out so the white nationalists don't have to kill them! https://t.co/IpjAuatNgQ

A domestic terrorists kills American citizens with the goal of killing immigrants and Trump's response is to propose anti-immigration legislation in his honor. Fuck this president and everyone who supports him. Y'all make up all of the worst things about this country. https://t.co/7GBzjnWIVM