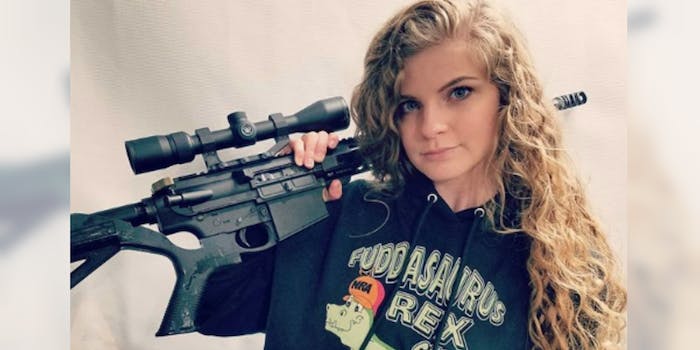 Some think she's lying to raise money for her wedding.

Bennett, who gained online prominence for legally open-carrying an AR-10 rifle at Kent State University, announced the theft via Facebook. On her Facebook page, dubbed “Kait’s Unsafe Space,” Bennett wrote that the $1,500 was cash intended for her wedding.

“I was staying at Comfort Suites in Newport for the Trump rally in Cincinnati, and someone stole $1,500 of my wedding money while we were out of the room,” Bennett wrote. “I know an employee went into the room while we were out because I told her someone left clothes in the closet.”

When she returned to her room, Bennett says all of her cash was gone.

“I called the cops and they laughed about it and said they probably couldn’t do anything since it was cash.” Bennett noted in her Facebook post that the hotel employee was supposedly “rude to me when I checked in.”

Someone stole $1500 from that gun girl I’m laughing pic.twitter.com/KqaED3Hujm

Bennett concluded her post by saying, “Now I’m $1,500 short for my wedding, and the person who did it won’t be held accountable. I’m sick to my stomach.”

Shortly after she posted the story to Facebook, it picked up steam on various social media platforms. While some sympathized with Bennett’s story, other’s made jokes at her expense.

And this is what is wrong with our country. People degrading someone all because they don’t believe in the same things. Just because someone doesn’t share the same beliefs does not mean u r any better.

Not sure when Kaitlin Bennett retweeted this, but she was robbed of $1500 while staying at a hotel. My sympathies to Ms Bennet and Rep Cummings. It is horrific to be a victim and then to have people treat it as if it were deserved. @KaitMarieox https://t.co/ttNrGtiVPw

Reading these comments .. wow. She "deserved it" and people laugh cuz they disagree with someone politically. Y'all wild. Bet these same people would be all kinds of triggered if this happened to them. Smh

While some flocked to Bennett’s defense, others used past statements from Bennett or President Donald Trump—who Bennett ardently supports—to mock her alleged situation. In particular, many people seized upon Bennett’s adamant support of gun rights as ammunition in their teasing. “Y’all just got robbed of 1200 bucks and you walk around strapped. Tell me again how your gun keeps you safe,” Twitter user @JasonCroswell wrote.

@KaitMarieox hey kait, sorry to hear you got robbed. you should really consider carrying a gun so this doesn’t happen again

Other’s poked holes in Bennett’s claim, noting that bringing wedding cash to a rally in another state seemed odd. “Lol I always bring my wedding savings in cash to random hotels and don’t put it in a safe…so believable,” one user wrote.

you lied about being robbed to grift a kickstarter for your wedding.

The irony that the little college gun idiot (@KaitMarieox ) got robbed almost immediately after re-tweeting Trump’s troll of Cummings. Karma is a cruel mistress. 10:1 she is lying her ass off so she can create a godundme to steal money from other idiots. https://t.co/mOzwOCOJ69

Several users also claimed that Bennett created a GoFundMe to replace the money, but, if true, it was already taken down by the time of this article’s writing.

Comfort Suites in Cincinnati did not wish to make a statement for this article. Kaitlin Bennet did not respond to a request for comment, nor did the Cincinnati Police Department.