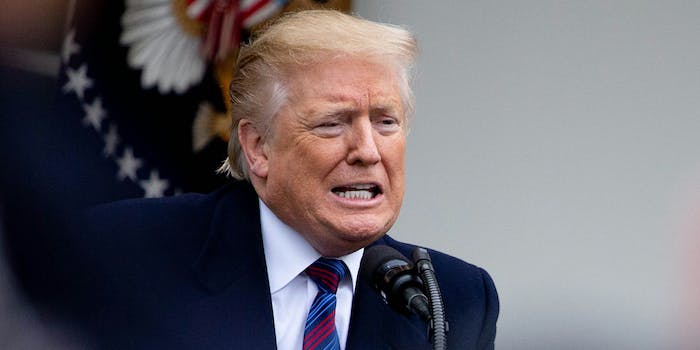 No, Trump didn’t break open the Pizzagate scandal in 2011

Ever since he launched his presidential campaign in 2015, Donald Trump has been ascribed mythical properties by his adoring fan base. According to the most conspiracy-obsessed diehards, when Trump’s not playing three-dimensional chess against his political enemies, he’s spending his spare time taking down the deep state and revealing a pedophilia ring at the highest level of power.

The last one has been a particular fixation of those in the far-right nether reaches of the internet, who became enamored with “Pizzagate,” the theory that Hillary Clinton’s campaign was secretly running a child sex trafficking ring out of a pizza parlor in Northwest D.C.

Now, an old clip of Trump saying the word Pizzagate had become fodder for the president’s fans, again claiming he’s truly a god among men.

Trump mentions P*zza Gate in 2011 before it was known to Wikileaks in 2016 or even mentioned in any Podesta emails. How is this possible??? pic.twitter.com/9UnAu7Xx1l

Trump mentions pizzagate during a phone interview on CNN, before it was … https://t.co/DF4zwVDyLK via @YouTube

The interview clip comes from 2011, when then Rep. Anthony Weiner (D-N.Y.) was engaged in a sexting scandal that saw him resign from Congress. Piers Morgan had Trump on CNN to discuss the situation, referring to a debate Trump once had with Weiner on Morgan’s show.

“Well, I was a little surprised by that debate, because, all of a sudden, he comes out of nowhere and starts going crazy. And, you know, I’ve known him over the years. And I learned a lot about him that night. I was absolutely shocked. I mean, he was — I found — to be almost unstable.

Unfortunately for those who believe the president can see the future, Trump’s Pizzagate reference was not about a child sex ring, but about a scandal of Trump’s own making. In 2011, Trump was photographed eating pizza with Sarah Palin in New York City, where he used a knife and fork.

But ever since the Watergate break-in, which eventually brought down President Richard Nixon, the news media has been guilty of trying to infuse any scandal with weight by adding the suffix “gate.”

So Trump eating pizza with a knife and fork and John Podesta being accused of running a pedophilia ring are both Pizzagates.

Maybe its time to rethink that practice?