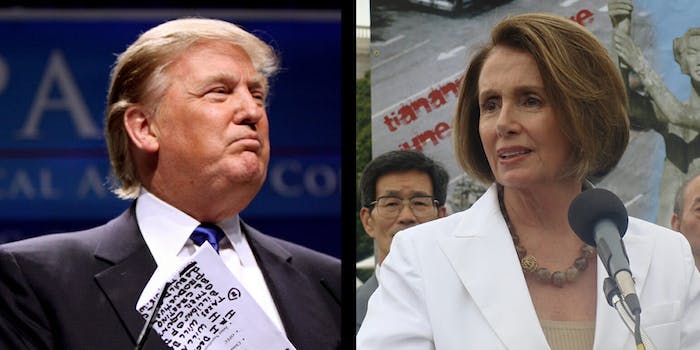 Was it the beginning of a coup?

Like a child being fought over by two divorcing parents, the State of the Union address spent several weeks being pulled back and forth by President Trump and Speaker of the House Nancy Pelosi.

In keeping with her constitutional duty, Pelosi invited Trump to enter the House chamber to deliver his speech, but rescinded the invitation due to concerns about security during the government shutdown. Trump responded by canceling a Congressional delegation (CODEL) to Brussels and Afghanistan that Pelosi was scheduled to go on.

Pelosi shot back by declaring that Trump would not be allowed into the House chamber while the shutdown was going on, and after more back and forth (all in the form of passive aggressive letters), Trump agreed to postpone the address, rather than giving it in the Senate chamber or at a rally in West Virginia.

Now, with the government shutdown averted for the next few weeks, it is unclear if or when it will happen. But regardless, that jockeying for power over the speech has led to a range of conspiracy theories about what was “really” happening with the nation’s most famous annual address.

Did Pelosi cancel it for nefarious reasons? Did she really sign the letters? Was the SOTU a set up for the mass arrest of Democrats? Here some of the most virulent State of the Union conspiracy theories:

When Trump pulled Pelosi’s CODEL’s military flight, it instantly sparked a conspiracy theory that Pelosi was caught trying to flee the country—and that theory immediately paired up with a tweet from Donna Brazile touting #PresidentPelosi.

The result: a plot by Pelosi to get herself named designated survivor (the cabinet member chosen to sit out the State of the Union to ensure continuity of government), take a cadre of Democrats out of the country, then take out Trump and Pence at the speech thanks to the lax security she’d engineered with the shutdown. Because Pelosi is third in the line of succession—after Trump and Pence—you would indeed have President Pelosi.

what does it mean?
a "message" to co-conspirators? pic.twitter.com/zCYhUqfbiu

But President Trump foiled the entire plan, thanks to his letter yanking the use of a military plane away from Pelosi.

Twitter threads and YouTube videos pushing the “thwarted Pelsoi coup” got massive viral exposure, mostly from disgruntled QAnon believers. They already think Trump is a Spock-level genius and Pelosi is a cartoon villain, so any conspiracy theory that can lump the two together is gold. But is there any truth to it?

Pelosi’s CODEL was meant to leave D.C. on Jan. 18 and while the exact length of the trip was a secret, it likely wouldn’t have been gone for than a few days. So she and the “plotters” would have been back home long before the State of the Union, scheduled for Jan. 29.

Beyond that, Trump and his staff are the ones who choose the designated survivor. Ensuring Pelosi wasn’t available to be secreted away would have been as simple as just not picking her. But she is next in line to the presidency after Pence, so if something did hypothetically happen to them both, she would indeed be President Pelosi.

Conspiracy theorists often obsess over minor details of something they perceive to be wrong or faked, while missing the larger context that surrounds those details.

When Pelosi handed down another letter that prevented Trump from using the House chamber until the shutdown was over, QAnon “bakers” immediately started picking it apart for the clues that only they see. Sure enough, they found something amiss: Pelosi’s signature on the new letter didn’t quite match the ones on previous letters.

Hmmm….
Last one is the signature on the Pelosi letter sent to Trump cancelling the State of the Union address. pic.twitter.com/g0bkqlvvOk

The implication: this newest letter was either fake or signed by a clone (accusing a public figure of being a clone of the “real” person is another well-worn QAnon trope.)

Skeptics of the “Nancy Pelosi is a clone” theory pointed out that people’s signatures can change from document to document, and the earlier letters were probably electronically signed.

Despite being declared cancer-free, and more recently, voting on a publicly released decision, Ruth Bader Ginsburg continues to be an obsession for conspiracy theorists.

Here's her vote on the military transgender ban, released today.

Since it’s tradition for Supreme Court justices to attend the State of the Union, any potential deception about Ginsburg being dead or decrepit would be exposed by her not attending, right? Is that why Pelosi has fought so hard to cancel the speech?

This might be a plausible theory, except it ignores one thing: Ginsburg didn’t attend the State of the Union in 2018, either. Instead, she chose to keep two speaking arrangements in Rhode Island that day. She wasn’t even the only SCOTUS justice not there, as Justices Alito, Kennedy, Sotomayor, and Thomas all skipped it. Prior to his death in 2016, Antonin Scalia hadn’t attended a State of the Union in nearly two decades, and Alito hadn’t gone to one since his infamous “you lie” moment at President Obama’s speech in 2010.

Ginsburg seems unlikely to attend Trump’s speech, no matter when he gives it, which will surely spark a new round of conspiracy theories.

Of course, even this isn’t the only RBG/SOTU conspiracy theory, as another one posits that her death (which has already happened) will be announced just before the State of the Union, to postpone it.

Remember “The Storm?” It’s the long-awaited purge of deep state Democrats and pedophiles that QAnon has been hinting at for well over a year, only for it to never arrive. The true believers haven’t stopped waiting for it, and think it’s right around the corner at the State of the Union.

Naturally, the deep state would want to do everything possible to prevent Trump from blowing open the nature of their crimes. Which he could do any time he wanted, and even could have done it at the State of the Union in 2018. He could still theoretically do it if he gave the State of the Union at an alternate location, such as the Senate or Guantanamo Bay.

But since Trump backed down completely from giving the speech until the shutdown is over, it makes one wonder if there even is a “storm” in the first place.

Unless now that the address may be back on, it’s time for it to be released.