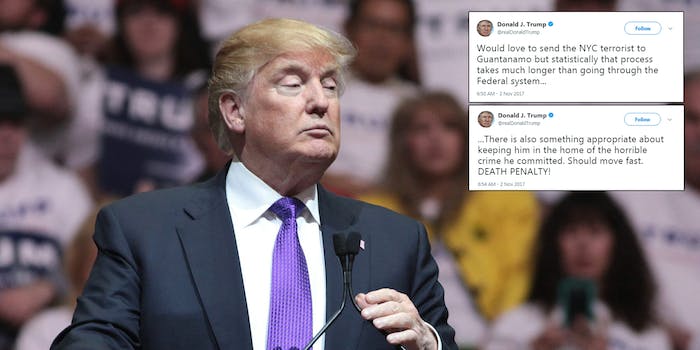 President Donald Trump is calling for the suspect accused carrying out a deadly terrorist attack in lower Manhattan this week to receive the death penalty, potentially complicating his prosecution.

Sayfullo Saipov, 29, was shot by police and arrested after he drove a rented pickup truck into a crowd of dozens of people, according to police. The suspect, a native of Uzbekistan and legal U.S. resident, was charged in Manhattan with providing material support to a foreign terrorist organization.

Trump began tweeting about his preference for how to handle Saipov’s criminal sentencing on Wednesday night, first tweeting that he should “GET DEATH PENALTY!”

NYC terrorist was happy as he asked to hang ISIS flag in his hospital room. He killed 8 people, badly injured 12. SHOULD GET DEATH PENALTY!

On Thursday morning, Trump continued to hammer home his point.

“Would love to send the NYC terrorist to Guantanamo but statistically that process takes much longer than going through the Federal system……There is also something appropriate about keeping him in the home of the horrible crime he committed. Should move fast. DEATH PENALTY!” Trump said in a series of tweets.

…There is also something appropriate about keeping him in the home of the horrible crime he committed. Should move fast. DEATH PENALTY!

Authorities say Saipov waived his Miranda rights during a hospital interview and said he was inspired to carry out the attack after watching videos produced by the so-called Islamic State, according to NPR.

However, Trump publicly expressing his view that Saipov is both guilty and deserves an exact punishment jeopardizes the case against Saipov. Defense attorneys can use statements such as Trump’s to argue that their client cannot receive a fair trial due to a tainted jury.

At a White House press briefing on Wednesday, Press Secretary Sarah Huckabee Sanders said Trump would consider treating Saipov as an “enemy combatant.” As an enemy combatant, Saipov would face a different interrogation and prosecution process than a typical defendant in a criminal case. He would not be guaranteed the right to a trial nor an attorney.

Trump on Wednesday said he would consider sending Saipov to the military detention center in Guantanamo Bay, Cuba. No person arrested in the United States has been sent to Guantanamo.

On Wednesday, less than a day after the attack, Trump called for the dismantling of an immigration program Saipov used to enter the country.