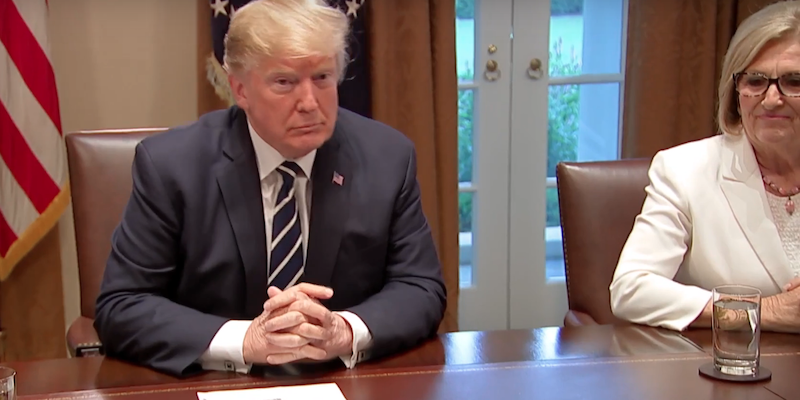 President Donald Trump had the words “THERE WAS NO COLUSION” scrawled in bold, black pen across his typed press conference notes on Tuesday, as he back peddled on remarks made Monday during his summit with Russian President Vladimir Putin.

Trump wrote in big black Sharpie on his printed remarks: “THERE WAS NO COLLUSION” pic.twitter.com/5wiG4ukGce

The President wrote in sharpie “THERE WAS NO COLUSION” during a meeting with congressional members. pic.twitter.com/dYk88Ot9h8

Misspelling of collusion aside, it’s hardly reassuring that the president needed to remind himself that he did not collude with Russia.

But after the past 24 hours, he’s clearly not taking any chances.

Trump faced a barrage of criticism and incensed his conservative supporters after casually admitting that he believed Putin’s claim that Russia did not interfere in the 2016 election, which contradicts the assessment of the U.S. intelligence community.

Today, he said he accepted that Russia was involved in election meddling.

“In a key sentence in my remarks, I said the word ‘would’ instead of ‘wouldn’t,” Trump said today, walking back his words and claiming that the confusion was due to grammatical error.

“The sentence should have been: ‘I don’t see any reason why I wouldn’t’ or ‘why it wouldn’t be Russia’. Sort of a double negative.”

In Tuesday’s statement, Trump also said: “I accept our intelligence community’s conclusion that Russia’s meddling in the 2016 election took place. Could be other people also. A lot of people out there.”

Still, remember, the most important thing is that there was no collusion.