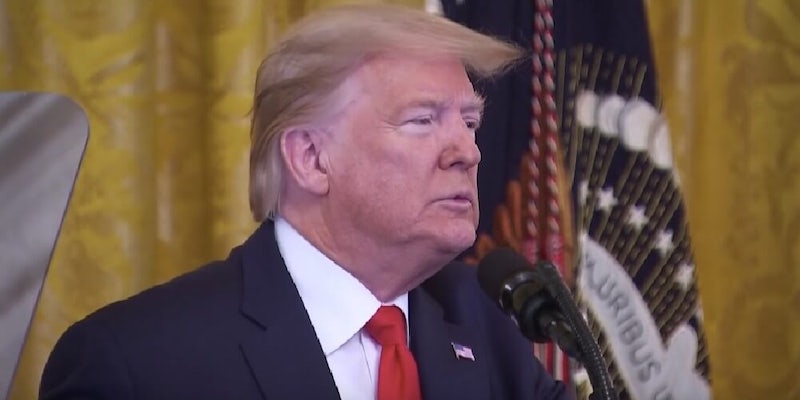 Despite repeated attacks against those who kneel, the president doesn't appear to take the anthem all that seriously.

President Donald Trump has been accused of disrespecting the national anthem after video uploaded to Instagram shows the commander-in-chief goofing off during “The Star-Spangled Banner.”

The video, according to the Miami Herald, was captured during a Super Bowl party at Trump International Golf Club in West Palm Beach, Florida. The video was then uploaded to the Instagram of a “real estate agent for a Russian-American firm” known to regularly visit the president’s numerous properties.

Donald Trump, who cares deeply about the national anthem, is caught goofing off in a video by a "real estate agent for a Russian-American firm who frequents Mar-a-Lago," where Trump was watching the Super Bowl with paying customers pic.twitter.com/eaTvUVUFSg

Attendees of the party, including first lady Melania Trump and the president’s teenage son Barron, can be seen with their hands over their hearts as the anthem plays in the background. Trump, on the other hand, was captured fidgeting and mingling with guests before attempting to imitate a band conductor.

The Herald notes that both the White House and the Trump Organization have declined to comment on the video.

The footage immediately led to criticism of the president, who has repeatedly attacked football players for kneeling in protest of police misconduct during the anthem.

In just one example, Trump during a 2018 interview on Fox and Friends spoke out against NFL players who chose to kneel.

In response to the video, Rep. Eric Swalwell (D-Calif.) called the president a “self-centered man-child” on Twitter.

“Our troops are worthy of a commander-in-chief who respects them,” the politician said. “Instead, they’re being led by a self-centered man-child.”

Our troops are worthy of a commander-in-chief who respects them. Instead, they’re being led by a self-centered man-child. https://t.co/QsHwtNz7mg

Unsurprisingly, Trump supporters either outright defended the president’s actions or made excuses as to why his behavior was unworthy of criticism.

News of the video also comes shortly after Trump supporters on Sunday protested music artist Beyoncé and her husband Jay-Z for sitting during the anthem at Sunday’s game in Miami. The two incidents, conservatives have argued, are not the same.

Beyonce & Jay Z sat during the National Anthem yesterday at the Super Bowl. What does that say about them? Why doesn't anyone report about them ?

“OMG NO HE SAID HI BACK TO A COUPLE PEOPLE OH THE HUMANITY!!!”. He’s literally standing at attention & even at one point put his hands up like he was a maestro, like he’s super excited abt that part of the anthem. You libbies need to get a life. Trump lives in your head rent free

What about your buddies JZ and Beyonce? By the way…they r not royalty