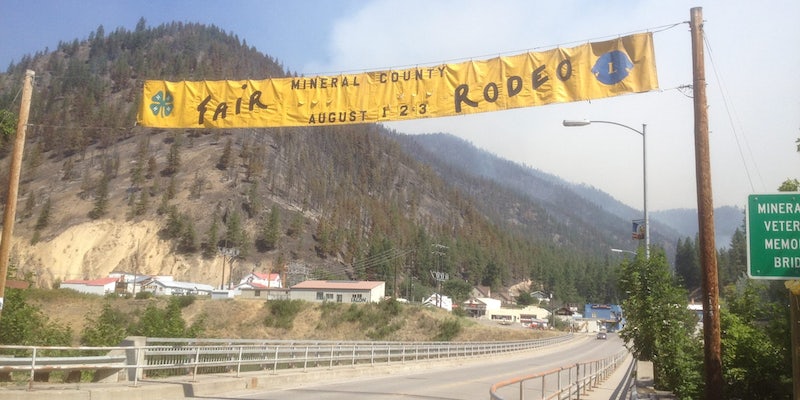 'He certainly didn't understand it was a crime.'

A man who was arrested after he allegedly fractured the skull of a 13-year-old boy for keeping his hat on during the national anthem didn’t realize it was a crime because he was acting on President Donald Trump’s orders, his defense lawyer has argued.

Curt James Brockway, 39, was arrested on Saturday after he allegedly assaulted the boy for “disrespecting the national anthem” at the Mineral County Fair in Superior, Montana, according to multiple reports.

The Mineral County Sheriff’s Office released a statement on Tuesday confirming Brockway was the perpetrator.

“Curt James Brockway was arrested at the scene and charged with Assault on Minor,” read the statement.

The boy’s mother told CBS News that she received a phone call within minutes after dropping him off at the fair.

“All of a sudden dude come[s] up, grabbed him by his neck, picked him up, and threw him to the ground head first,” she told CBS.

A witness on the ground said she was dropping by the fair for the national anthem when she heard a “pop,” according to the Missoulian.

Hennick recognized him as the neighbor of her relative.

“He said (the boy) was disrespecting the national anthem so he had every right to do that,” she said of Brockway.

“All of the witnesses that I have talked to says this was just completely random,” the mother told CBS. “There was just no exchange, nothing. He just targeted Wally, grabbed him and took him down.”

CBS reported that it happened within moments after the boy walked onto the scene. The boy has said he can’t remember anything and has since been released from the hospital, according to Montana news website 8KPAX news. He bled from his ear for almost six hours after the assault, his mother told CBS.

According to the Missoulian, Brockway is currently serving probation for a 2010 charge of assault with a weapon. In 2011, he pleaded guilty to the charges, according to 8KPAX.

His defense attorney, Lance Jasper, told the newspaper that the president’s “rhetoric” led the U.S. Army veteran to believe he should assault the boy for keeping his hat on during the anthem.

“His commander in chief is telling people that if they kneel, they should be fired, or if they burn a flag, they should be punished,” Jasper said. “He certainly didn’t understand it was a crime.”

Although the state requested the bond to be set at $100,000, the judge has said he can be released on his own recognizance, according to 8KPAX. People are expressing their anger on social media for excusing a man with previous charges who allegedly assaulted a kid.

“A registered violent offender assaulted a child causing him to suffer a fractured skull, but was released on his own recognizance? Seriously Montana—WTAF?” wrote one person on Twitter.

Brockway is scheduled to be arraigned next week, according to the Sheriff’s Office’s statement on Facebook.