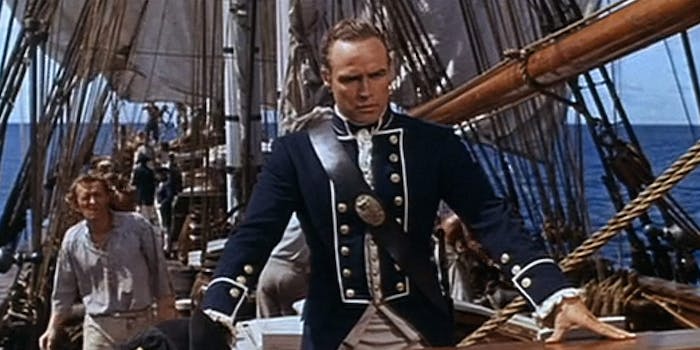 Trump shocks internet with ‘Mutiny on the Bounty’ tweet

The president responds to Democratic governors.

On June 16, 1858, in advance of the approaching Civil War, Abraham Lincoln gave one of his most infamous speeches, declaring that “a house divided against itself cannot stand” underlying his core belief that above all else, preserving and protecting the American union was of the utmost importance.

And on April 14, 2020, President Donald Trump delivered his newest edict which declares, “a gold old fashioned mutiny” is an “exciting and invigorating thing to watch.”

He referenced the 1962 movie Mutiny on the Bounty in his tweet. The captain of the HMS Bounty was considered a cruel, abusive leader who his crew rebelled against.

One soon-to-be president presided over the ripping apart of America with solemn forbearance. The current president appears to be hollering “get your popcorn.”

Coronavirus has helped exacerbate the faultlines within America, perhaps more so than ever. Blue states, wracked by outbreaks due to large urban centers, have been taking some of the most cautious and aggressive protection measures. Conversely, red state governors have been loath to enact social distancing measures and stay-at-home orders.

Now as the country grapples with re-starting sectors of the economy, governors in blue states are pledging caution and restraint, while, led by Trump’s braying, most red states are demanding we hit the gas.

Regardless of what Trump specifically means by his mutiny tweet, it does by chance come on the same day as when John Wilkes Booth shot Lincoln in the back of the head in Ford’s Theater.

The entire mutiny ended in relative disaster as well, with the mutineers eventually settling on an island, and at least 30 people dying in an attempt to bring them to justice.

A good old-fashioned mutiny is neither invigorating nor exciting. Unless you’re the head of a death cult, which as Republicans have pulled for lax coronavirus policy, they’ve been repeatedly called.

David Covucci is the senior politics and technology editor at the Daily Dot, covering the nexus between Washington and Silicon Valley. His work has appeared in Vice, the Huffington Post, Jezebel, Gothamist, and other publications. He is particularly interested in hearing any tips you have. Reach out at [email protected]dot.com.