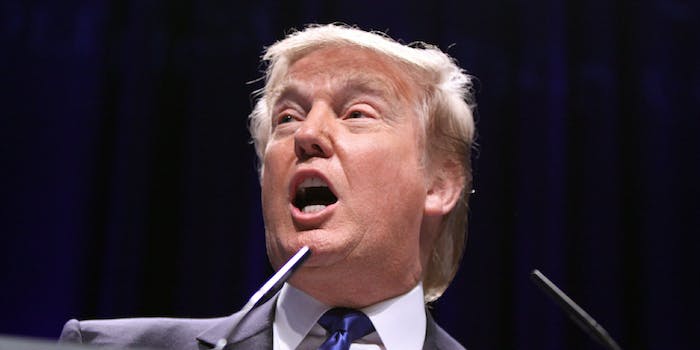 Most people don’t think Trump is actually ‘draining the swamp’

The rest of the poll wasn't great for Trump.

Only a quarter of Americans feel President Donald Trump has kept his promise to “drain the swap,” according to a new poll.

Monmouth University found that 25 percent of people polled think that the president has drained “the swamp” like he promised during the campaign, which is up from a poll done in December, but consistent with ones conducted during August and May of last year.

“Even though the president has certainly shaken up Washington, one of the reasons his job rating remains underwater is that he really hasn’t moved the needle on actually changing the political culture there. Despite resurrecting his call to ‘drain the swamp’ in a tweet he sent yesterday, few Americans feel the capital has become any less swampy under Trump,” Patrick Murray, director of the independent Monmouth University Polling Institute, said in a statement.

Trump yesterday endorsed term limits as a way to “drain the swamp.”

I recently had a terrific meeting with a bipartisan group of freshman lawmakers who feel very strongly in favor of Congressional term limits. I gave them my full support and endorsement for their efforts. #DrainTheSwamp

Overall, the university’s polling arm found that 41 percent of people approved of the president’s job performance, just a tick higher than the average of national polls. According to Monmouth’s polling, Trump has hovered between 32 percent and 43 percent since the beginning of this year.

Monmouth pollsters spoke to 803 adults from April 26 to April 30. The margin of error was 3.5 points.

You can read more about Monmouth University’s poll here.