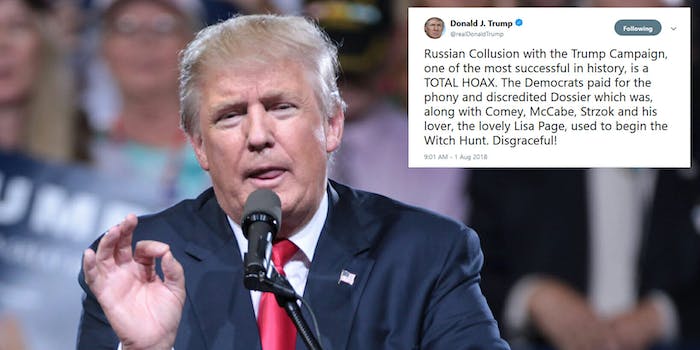 Trump tweets about the ‘lovely Lisa Page’ and everyone is confused

No one knows what's going on.

President Donald Trump railed against Special Counsel Robert Mueller‘s probe into Russian interference in the 2016 election on Wednesday morning. It was a perfectly normal occurrence, except this time the president used an adjective to describe one of his frequent targets that caught the eye of several Twitter users.

Over the course of the morning, Trump called on Attorney General Jeff Sessions to “stop” the “Rigged Witch Hunt” and claimed (again) that it was a “hoax.” He also said the investigation—which has alleged that Russian actors sowed discord among American voters online ahead of the election and Russian intelligence officials hacked into the DNC—was tearing the country apart.

This was pretty typical for the president, who has made similar claims in the past.

However, when discussing FBI employees Peter Strzok and Lisa Page—who sent anti-Trump texts to one another amid an affair—the president called Page (who has been the subject of countless tweets of his in the past) “lovely,” which struck some people online.

“Russian Collusion with the Trump Campaign, one of the most successful in history, is a TOTAL HOAX. The Democrats paid for the phony and discredited Dossier which was, along with Comey, McCabe, Strzok and his lover, the lovely Lisa Page, used to begin the Witch Hunt. Disgraceful!” the president tweeted on Wednesday morning.

Calling Page “lovely” is a different tune from Trump.

In the past, he has targeted her on numerous occasions and at one point said it “doesn’t get any lower” than the texts sent between her and Strzok.

Ex-FBI LAYER Lisa Page today defied a House of Representatives issued Subpoena to testify before Congress! Wow, but is anybody really surprised! Together with her lover, FBI Agent Peter Strzok, she worked on the Rigged Witch Hunt, perhaps the most tainted and corrupt case EVER!

As I head out to a very important NATO meeting, I see that FBI Lover/Agent Lisa Page is dodging a Subpoena & is refusing to show up and testify. What can she possibly say about her statements and lies. So much corruption on the other side. Where is the Attorney General? @FoxNews

FBI Agent Peter Strzok, who headed the Clinton & Russia investigations, texted to his lover Lisa Page, in the IG Report, that “we’ll stop” candidate Trump from becoming President. Doesn’t get any lower than that!

But now he’s into her?

Because while Trump has been known to add adjectives in front of his rivals and critics names, Twitter felt that “lovely Lisa Page” didn’t seem like the president’s normal name-calling.