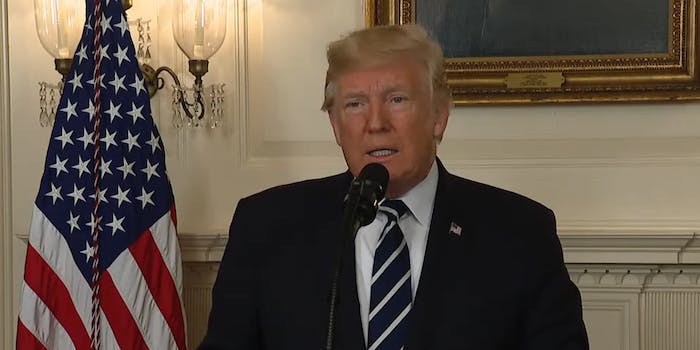 'In moments of tragedy and horror, America comes together as one–and it always has.'

Trump said the suspect, Stephen Paddock of Mesquite, Nevada, “brutally murdered” 59 people attending the Route 91 Harvest Music Festival concert and said he would travel to Las Vegas on Wednesday to meet with officials, first responders, and families of the victims.

“Scripture teaches us the Lord is close to the brokenhearted and saves those who are crushed in spirit,” Trump said. “We seek comfort in those words, for we know God lives in the hearts of those who grieve.”

“In moments of tragedy and horror, America comes together as one–and it always has. Our unity cannot be shattered by evil. Our bonds cannot be broken by violence. And though we feel such great anger at the senseless murder of our fellow citizens it is our love that defines us today and always will forever.”

On Monday morning, Trump drew criticism online for a tweet where he offered his “warmest condolences” to the victims of the shooting.

Authorities have identified Stephen Paddock, a 64-year-old man from Nevada, as a suspect in the attack. He was found dead in a 32nd-floor room at the Mandalay Bay hotel where it is believed he shot at the crowd of people at the Route 91 Harvest Festival concert.

You can watch the full statement below.