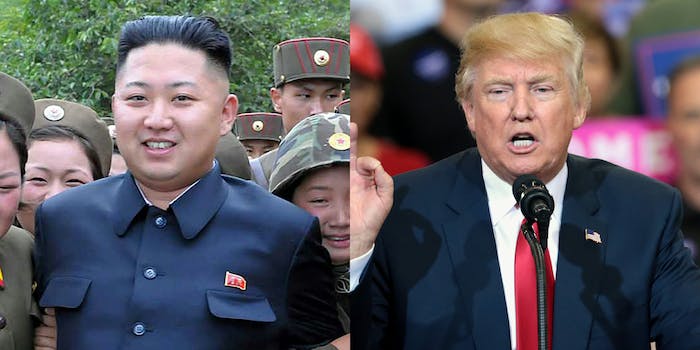 The war of words escalates.

In his speech earlier this week, Trump threatened to “totally destroy” the rogue nation. “We will have no choice but to totally destroy North Korea. Rocket Man is on a suicide mission,” Trump said, using his newfound nickname for the Hermit Kingdom’s dictator.

Kim responded by calling Trump “unfit to hold the prerogative of supreme command of a country,” “deranged,” a “frightened dog,” and a “dotard.”

On Friday morning, Trump lashed out at Kim’s incendiary response to his speech, saying in a tweet that Kim is “obviously a madman.”

Kim Jong Un of North Korea, who is obviously a madman who doesn't mind starving or killing his people, will be tested like never before!

“Tested like never before” is notably tamer rhetoric than Trump has previously used. In earlier threats to North Korea, he promised both “fire and fury” and announced that military options are “locked and loaded.”