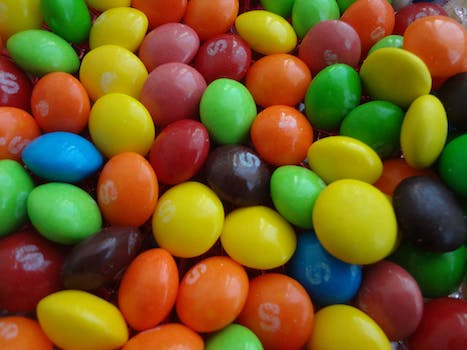 Refugee photographer speaks out: 'This was not done with my permission.'

Earlier this month, Donald Trump Jr., the eldest son of 2016 Republican presidential nominee Donald Trump, tweeted about Skittles, and it briefly threw the election into chaos. 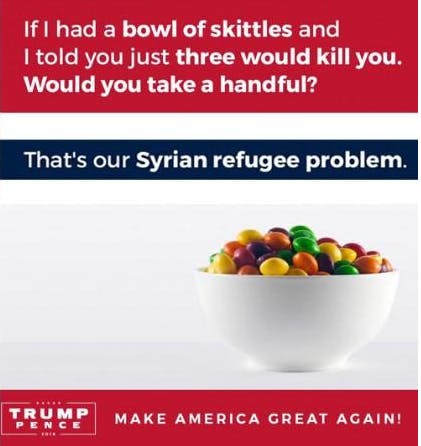 As of Wednesday, the image in Trump Jr.’s tweet has been removed, owing to a request from the copyright holder.

The man who took the picture used in the meme tweeted by Trump Jr. had good reason to want the image, which encouraged the United States to stop taking in refugees fleeing the horrors of the Syrian civil war, disappeared from the internet. The photographer was himself a refugee.

Over the weekend, U.K.-based photographer David Kittos filed a takedown notice under the Digital Millennium Copyright Act. “The image of a bowl of skittles is mine and has always been set as “ALL RIGHTS RESERVED” in my flickr library,” Kittos wrote. “It was copied and is being used WITHOUT my permission. I have never been contacted by Donald Trump Jr or any representative about the image, before of after it was used in the Tweet.”

Kittos immigrated to the U.K. in the as a 6-year-old in 1974, his family fleeing the Turkish occupation of Cyprus. “This was not done with my permission,” he told the BBC. “I don’t support his politics and I would never take his money to use it.”

“This isn’t about the money for me,” he continued. “They could have just bought a cheap image from a micro stock library. This is pure greed from them. I don’t think they care about my feelings. They should not be stealing an image, full stop.”

Opposition to the Obama administration’s plan to dramatically increase the number of Syrian refugees allowed into the United States has been a crucial plank in Trump’s platform. An outgrowth of his proposal to ban all Muslims from entering the Unites States, on which the former reality TV star has repeatedly waffled, opposition to Syrian refugees is a topic Trump used as a cudgel to attack his general election rival, former Secretary of State Hillary Clinton.

Following the deadly terrorist attack at a gay nightclub in Orlando, carried out by an immigrant from Afghanistan, Trump asserted that there is no screening process in place for refugees. “The burden is on Hillary Clinton to tell us why she believes immigration from these dangerous countries should be increased without any effective system to really screen,” he said. “We’re not screening people.”

In reality, the screening process used to check the background of Syrian refugees is among the most intensive vetting systems applied to any group in U.S. history. Before potential refugees even make contact with U.S. officials, they are screened by United Nations High Commissioner for Refugees—a process that includes comprehensive interviews, reference checks, and biometric screenings. Only a small group, typically those under the gravest threat of mortal danger, are then referred to foreign governments like the United States. From there, U.S officials carry out another round of evaluation, which requires each potential refugee to gain the approval of nine separate federal agencies. The entire process takes about two years.

Kathleen Newland, a senior fellow at the Migration Policy Institute, explained to the Economist last year that “refugee resettlement is the least like route for potential terrorists… Of the 745,000 refugees resettled since September 11th, only two Iraqis in Kentucky have been arrested on terrorist charges, for aiding al-Qaeda in Iraq.”

The type of analogy employed by Trump Jr. has a long and troubling history. A story in the Intercept traced the idea back to a German author named Julius Streicher, who published Nazi propaganda and was hanged at Nuremberg.

In an anti-Semitic children’s book published in 1938, Streicher wrote, “However they disguise themselves, or however friendly they try to be, affirming a thousand times their good intentions to us, one must not believe them. Jews they are and Jews they remain. For our Volk they are poison… Like the poisons mushroom… Just as a single poisonous mushrooms can kill a whole family, so a solitary Jew can destroy a whole village, a whole city, even an entire Volk.”

For its part, Mars, Inc., the manufacturer of Skittles, wanted nothing to do with the controversy. “Skittles are candy. Refugees are people,” a company representative wrote in a statement to the Daily Dot shortly after the tweet went viral. “We don’t feel it’s an appropriate analogy. We respectfully refrain from further commentary as anything we say could be misinterpreted as marketing.”