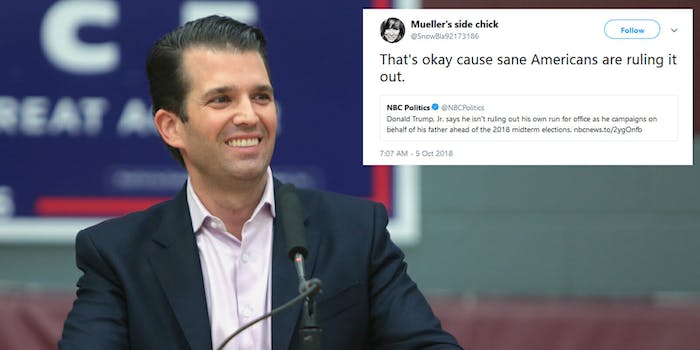 Some people online weren't thrilled at the idea.

Could Donald Trump Jr. be a congressman or governor someday in the future?

President Donald Trump‘s son didn’t rule out the possibility of running for office in the future when asked on Thursday.

NBC News broached the subject on Thursday, and Trump Jr. said he would keep his options open about following his father into politics. He made the remarks as he campaigned for Sen. Ted Cruz (R-Texas), who is facing a tough reelection fight against Democratic challenger Beto O’Rourke.

“You never know. I’m never going to rule anything out,” he said, adding: “Honestly right now, I enjoy being in the fight. I enjoy fighting for guys that are doing great work and they’re helping my father. I’m going to do that for the time being and we’ll figure it out later.”

However, at least one position doesn’t seem to be on the president’s son’s mind, an attempt to become the governor of New York.

“People keep saying that one,” Trump Jr. said. “I don’t know about New York governor, that’s not really of that much interest to me.”

This isn’t the first time his future in politics has been speculated about, including rumors about the governorship.

Last year, the president’s son told members of a New York gun club that he interested in running for office and had his sights set on becoming the governor of his home state, according to Axios.

While he said on Thursday that the governor job didn’t interest him, he sang a different tune in 2017.

“People keep asking me: when are you running for mayor?” he said, according to the Independent. “Well, I’m not. If I was, New York City mayor is much less interesting to me than perhaps other things like governor of a state. That’s not saying I’m running. It’s just saying that, hey, if I ever did something, I’d probably be more interested in something like that.”

The idea of Trump Jr. being an elected official didn’t sit well with some people online.

I haven't ruled out becoming King Under the Mountain. https://t.co/qXxJyYzEUQ

More evidence that we’re in the Bad Place. https://t.co/D7HZ1WNe3I

Given New York’s consistently liberal voting record, the president’s son would probably have better luck if he ran in a different state.