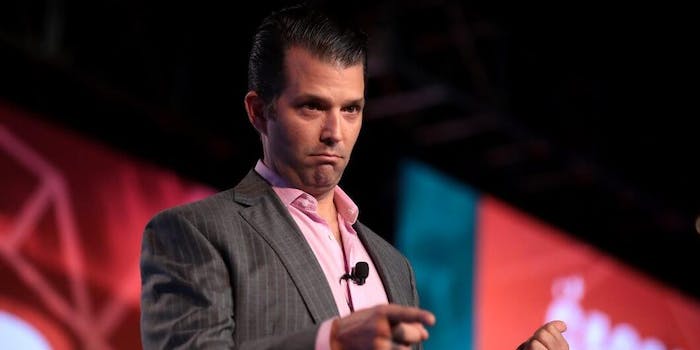 The First Son is always a shining example for Americans everywhere.

President’s children are held to a certain standard—or they were until Nov. 8, 2016. Since Donald Trump’s election, his eldest three children have made a mockery of the decorum, ethics and other standards that formerly applied to the commander-in-chief’s progeny.

Case in point: Yesterday, Donald Trump Jr. retweeted UFC fighter Tim Kennedy calling Lt. Col. Alexander Vindman a “douche bag” for politely asking Rep. Devin Nunes (R-Calif.) to refer to him by his rank and title rather than as “mister” during the impeachment hearings.

Here's the president's son sharing a tweet calling an active-duty servicemember a "douche bag" for demanding basic respect from a member of Congress who questioned his allegiance to the country he fought and bled for pic.twitter.com/1HJ6CWS1L6

Clearly this was an attempt to distract from the issue at hand, testimony against the president by a combat veteran who received a Purple Heart after being wounded in battle, by focusing on something utterly meaningless.

President Donald Trump himself got in on the petty fun of mocking Vindman for precisely the same reason during an interview yesterday. Much like his father, Trump Jr.’s Twitter feed is basically an exercise in distraction at present.

The “douche bag” tweet played very well with Trump’s fans, particularly after it was retweeted by the likes of Mike Cernovich, the Federalist co-founder Sean Davis, and Trump Jr.

Many enjoyed mocking Vindman, a lifelong public servant who works for the National Security Council alongside his twin brother.

“He’s only a Lt Col to someone in the service. To us he’s Captain Butthurtz,” tweeted one. “As a veteran I literally hurt my eyes because they rolled so hard,” quipped another.

The only reason someone'd want their rank stated in that situation is so the world knew he was in the military. It means nothing in this context and wins him no respect.

@pvtjokerus is right, @DevinNunes laid a trap and this guy walked into it and by doing so, put his pompousness on full display.

As is ever the case in politically polarized 2019, plenty of people across the Twitter aisle had the opposite reaction. They were disgusted by the obvious attempt to malign Vindman’s character in order to undermine his testimony.

A few noted that it is commonplace to use witnesses’ official titles during congressional hearings. Several actually agreed with their counterparts that Nunes intentionally slighted Vindman, though they took the opposite view of whether this was appropriate.

Others suggested people should consider the messenger on this particular tweet.

As UFC fighter Jon Jones noted, Kennedy has previously told soldiers that if they “stop being a pussy,” their PTSD will be cured.

“Kind of surprised-not-surprised that pieces of shit like him and Jr clump together,” Jones added.

Tim Kennedy, the MMA fighter that bragged about murdering women and children when he was a soldier and calls soldiers with PTSD "pussies"? Kind of surprised-not-surprised that pieces of shit like him and Jr clump together.