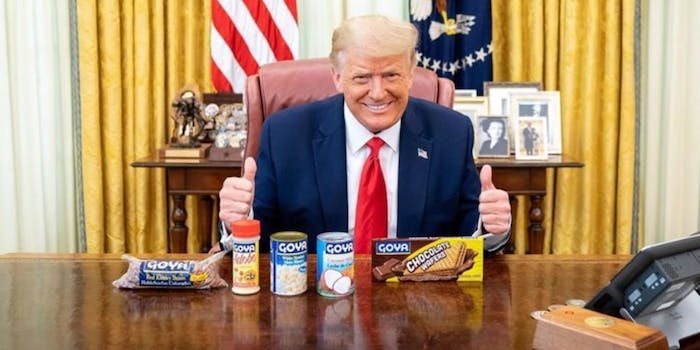 The culture war has now entered the bean phase.

President Donald Trump on Wednesday uploaded a photo to Instagram showcasing an assortment of products from Goya Foods.

The food company has found itself at the center of America’s ideological war after Goya’s CEO praised the president last week. The incident led many to boycott Goya Foods, while Trump’s supporters have used the incident to purchase the company’s products en masse.

The photo shows Trump in the Oval Office giving two thumbs up behind a line of Goya products.

The president’s post came just one day after his daughter, Ivanka Trump, posted a photograph of a can of Goya beans on social media.

Questions have since been raised about the ethics and legality of the pair’s actions given that both are public servants.

Federal regulations state that “an employee shall not use his public office for his own private gain, for the endorsement of any product, service or enterprise, or for the private gain of friends, relatives, or persons with whom the employee is affiliated in a nongovernmental capacity.”

The nonprofit organization Citizens for Ethics responded to the bean-related phenomenon with astonishment on Wednesday.

“Never thought we would have to analyze the ethics of promoting canned beans but here we are,” the group wrote on Twitter.

Legal considerations aside, the Trump administration’s questionable promotion also led to a cascade of criticism and memes.

“We’re in the middle of a pandemic and the president along with a ‘senior adviser’ are pimping beans on social media,” @NumbersMuncher wrote. “I feel like I’m taking crazy pills.”

Some even dubbed the moment the “Great Bean War of 2020.”

The White House has pushed back on the criticism of Ivanka’s tweet as an example of “the cancel culture movement.”