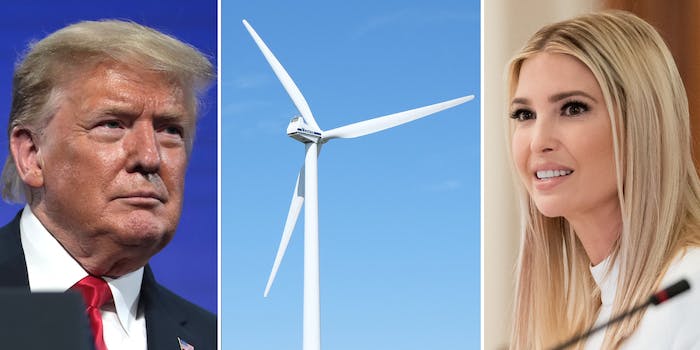 Is Ivanka Trump trolling her father with her jobs retraining program?

Trump has made it abundantly clear he isn't a fan of windmills.

A new White House ad campaign encouraging unemployed people to “find something new” and pushed by Ivanka Trump on Tuesday encourages people to explore a career in one of her father’s least favorite sectors: wind energy.

The “Find Something New” campaign has been harshly criticized for being tone-deaf, with millions of Americans losing their jobs during the coronavirus pandemic.

Ivanka Trump pushed the campaign on Tuesday, saying it allows for people to “explore all your options to acquire in-demand job skills.”

And one of those jobs, highlighted on the front page of the website, is “wind turbine technician.”

It’s somewhat surprising to see the job being promoted on the website, as President Donald Trump has made it abundantly clear that he isn’t a fan of windmills, despite saying he knows “a lot about wind.”

Trump has long made incorrect claims about wind turbines. In April of last year, the president even implied that windmills caused cancer. There is no evidence to support such a claim.

But Trump has a long history of bashing windmills.

Last year the president was asked about climate change at the G-7 Summit in France. He responded that he didn’t want to sacrifice “wealth” in the United States to make way for “dreams” and “windmills.”

“I feel that the United States has tremendous wealth, the wealth is under its feet. I’ve made that wealth come alive… We are now the number one energy producer in the world, and soon it will be by far,” Trump said, adding: “I’m not going to lose that wealth. I’m not going to lose it on dreams, on windmills, which, frankly, aren’t working too well.”

Trump told a crowd of supporters last year that wind energy isn’t a viable option because if the wind stops blowing, it would lead to power outages.

Even before he became president, Trump bashed windmills several times on Twitter—incessantly pointing out that they killed birds.

Given the president’s clear disdain for the alternative energy source, it is surprising to see it on a campaign pushed by his daughter.