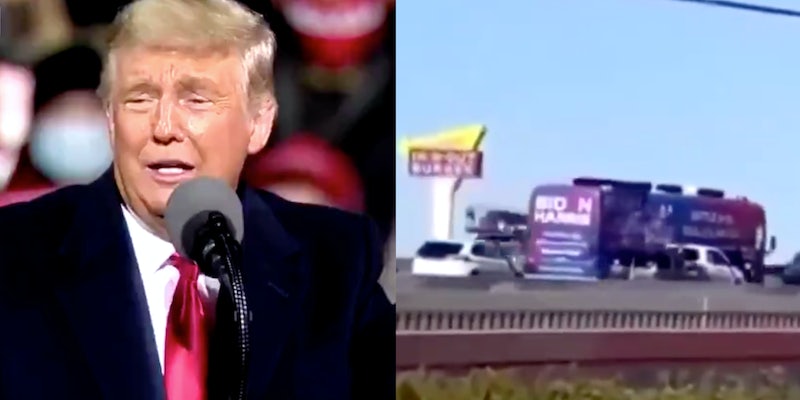 He tweeted out his 'love' for Texas and called the incident 'hot' at a rally.

President Donald Trump on Saturday tweeted out his love for Texas in response to a viral video that shows his supporters surrounding a Biden-Harris campaign bus on a highway.

On Friday, a campaign bus for Democratic presidential candidate Joe Biden made its way from San Antonio to Austin for multiple events. That same day, videos began circulating online showing a slew of trucks bearing pro-Trump flags swarming the bus.

It was later reported the trucks waited on the highway to “ambush” the bus. In one video, a truck can be seen ramming into the car of a Biden volunteer who was following the bus. Democratic officials and other witnesses have claimed the trucks were attempting to drive the Biden-Harris bus off the I-35 highway and that many of the people in the trucks were armed. The Biden campaign and Texas state Democrats canceled three events due to the incident, which is now also being investigated by the Federal Bureau of Investigation (FBI), the Texas Tribune reported.

According to the Tribune, the harassment of the bus was apparently pre-planned on social media. “Trolling is Fun!” one post reportedly read. “Join us in #SanAntonio to escort the Biden bus coming through San Antonio.”

Trump on Saturday night shared one of the viral videos featuring his supporters surrounding the bus set to Tech N9ne’s “Red Kingdom,” a song popular among the MAGA crowd, and wrote, “I LOVE TEXAS!”

Trump also called the incident a “hot thing” at a rally in Pennsylvania on Saturday evening before touting a conspiracy theory about Twitter’s trending topics.

“Anybody see the picture of their crazy bus driving down the highway, they are surrounded by hundreds of cars, they are all Trump flags all over the place. … It’s like a hot thing,” Trump says. “See, that’s really No. 1 trending. You know, they won’t put that—that’s No. 1 trending. They come up with No. 1 trending—it’s not a trend, it’s whatever they want to do.

Democrats are now condemning the president’s comments. “What the President tweeted in regards to Texas is reckless, dangerous and an intimidation tactic,” Biden campaign spokesperson Symone Sanders tweeted.

It didn’t take long for “Trump Terrorism” to begin trending on Twitter. “I never thought in my lifetime I would see a president encourage violence against fellow Americans. Incredible. Unconscionable,” Twitter user @Bets243 wrote in response to the comments Trump made at his rally.

Texas is considered a toss-up among many political forecasters in the upcoming presidential election.