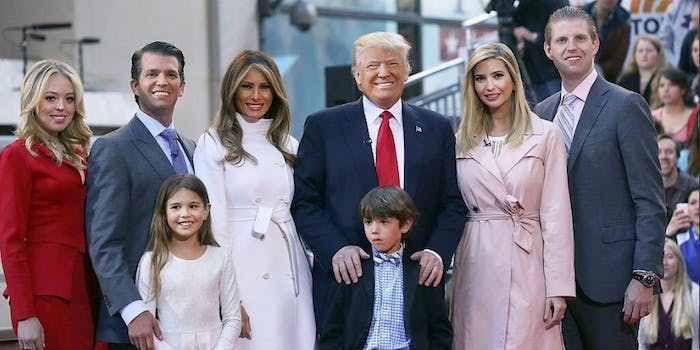 President-elect Donald Trump’s children, Donald Jr. and Eric, are reportedly auctioning off the chance to attend a Trump family hunting trip, according to an invitation leaked by TMZ.

The event is called “Opening Day,” and it will reportedly take place on Jan. 21, Trump’s first full day in office, at the Walter E. Washington Convention Center. Ticket options apparently range from $25,000 to $1 million, with the most expensive option including a private photo session with the new president of the United States.

Important to note: $1M hunting trip with Trump sons gets you a private reception with the President *the day after the inauguration.* https://t.co/fBnltU2rvq

“Opening Day is your opportunity to play a significant role as our family commemorates the inauguration of our father, friend and President Donald J. Trump,” the invite says. “Join us as we celebrate the great American tradition of outdoor sporting, shooting, fishing and conservation.”

Anyone willing to shell out $1 million will have the option of attending a multi-day hunting or fishing trip with Trump’s sons, the invite says. The money raised during the event will go toward conservation charities, though it does not specify which ones.

Last week, Ivanka Trump, the president-elect’s daughter, called off a similar fundraiser in which she was offering a 45-minute conversation over coffee to the highest bidder. The auction reportedly reached more than $72,000 before it was called off due to the ethical concerns of selling special access to a first family.

Read the full report at TMZ.