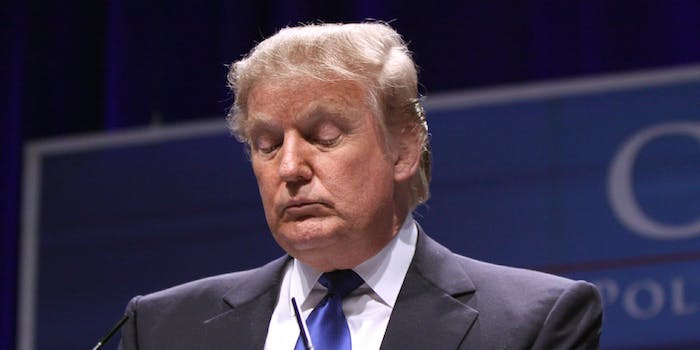 It's been a tough few days for the president's administration.

President Donald Trump is reportedly “mad as hell” about the turmoil that has engulfed his administration in recent days, according to a new report.

The president has been roiling after Hope Hicks, the White House communications director, announced that she would resign from her post on Wednesday. Adding to his bad attitude is his beleaguered relationship with Attorney General Jeff Sessions, Axios reports.

Hicks, who is a close aide to the president and worked with him before coming into the White House, resigned just one day after she told the House Intelligence Committee that she tells white lies for the president. However, it does not appear that her testimony was the reason for her resignation.

Rob Astorino, a friend of Trump’s, told CNN that Hicks’ departure will not sit well with the president.

“Hope was one of the people he really, really trusted,” Astorino told the news outlet. “So with her leaving, there is only a handful left, and he’s going to feel like he is on an island.”

Meanwhile, Sessions has long been the subject of the president’s ire. On Wednesday, Trump bashed his attorney general, calling his recent work to have the Inspector General investigate FISA abuse “disgraceful.”

Why is A.G. Jeff Sessions asking the Inspector General to investigate potentially massive FISA abuse. Will take forever, has no prosecutorial power and already late with reports on Comey etc. Isn’t the I.G. an Obama guy? Why not use Justice Department lawyers? DISGRACEFUL!

The two men’s relationship has reached the point where Trump has called Sessions “Mr. Magoo,” a reference to the cartoon character. According to Axios, every time Trump hears about Sessions, his “head explodes.”

It’s been a tumultuous few days for Trump’s administration.

On Tuesday Chief of Staff John Kelly downgraded Jared Kushner‘s security clearance–and the Washington Post reported that at least four countries sought to exploit leverage over him and his business arrangements.

Shortly after Kelly’s announcement, CNN reported that Special Counsel Robert Mueller is probing Trump’s business ties with Russia from before he announced his intention to run for president. Trump’s legal team has also reportedly been weighing their options for a possible interview between Mueller and the president.

All of these events—in addition to a general sense of infighting among administration officials—have left Trump in a “bad place.”

Trump is in a bad, mad place, feeling ill-served and confined by staff. The people he genuinely enjoys and feels close to are gone (Keith Schiller), leaving (Hope) or getting pounded in the press (Jared).