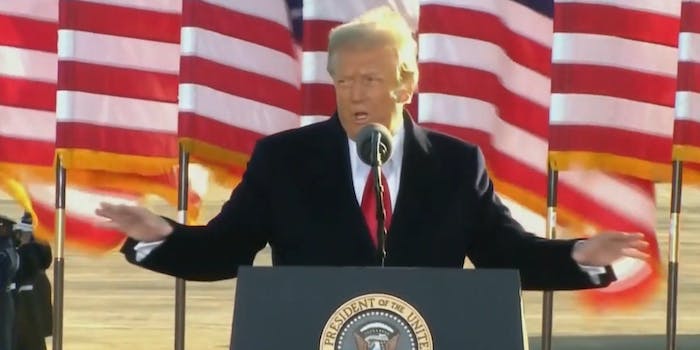 Trump’s parting words to America: ‘Have a good life’

His last words as president being 'have a good life, we will see you soon' sparked jokes and memes.

President Donald Trump delivered a farewell address at Joint Base Andrews on Wednesday morning, where a small group of supporters and members of his family and administration gathered to send him off as his presidency reached its end.

His parting words to both the faithful and the nation were: “Have a good life.”

“Just in leaving, I want to thank our vice president Mike Pence and Karen. I want to thank Congress, because we really worked well with Congress—at least certain elements of Congress. But we really did. We’ve gotten so much done that nobody thought would be possible,” Trump said at the end of his address. “I want to thank the great people of Washington D.C., all of the people that we worked with to put this miracle together. So, have a good life. We will see you soon.”

Trump’s last words as president being “have a good life, we will see you soon,” followed by “YMCA” playing, quickly became an inflection point for jokes and memes in the waning hours of his presidency.

“Absolutely screeching at ‘have a good life,'” one Twitter user wrote.

“‘Have a good life! See you soon!” – Trump signing off and also me signing a yearbook for someone I never really knew,” another user chimed in.

President-elect Joe Biden will officially be sworn in at 12:00pm ET.