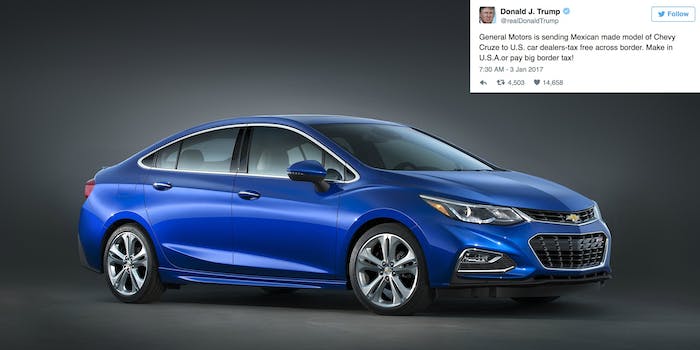 Another week, another company targeted by Donald Trump in an early-morning tweet.

On Tuesday, the president-elect criticized General Motors for building cars in Mexico that American dealerships are able to import tax-free.

GM responded to Trump’s statement by saying that nearly all Chevy Cruze sedans sold in the U.S. are made at its plant in Lordstown, Ohio, while “a small number” of Mexico-made Cruzes are “sold in the U.S.”

GM’s stock price dropped 1 percent—a fall of about $250 million of the company’s market value—immediately following Trump’s tweet and remained down about 0.85 points just after 8am ET.

In similar tweets last month, Trump criticized Boeing for the cost of the development and manufacturing of new Air Force One aircraft and Lockheed Martin for the cost of its F-35 fighter jet program.

As with GM, the tweets sunk those companies’ stock prices. The chief executives of both Boeing and Lockheed later agreed to lower the costs of their respective projects following Trump’s criticism.

Trump has consistently criticized the North American Free Trade Agreement (NAFTA) for hastening the transfer of U.S. jobs to Mexico, a stance backed by the United Auto Workers union.