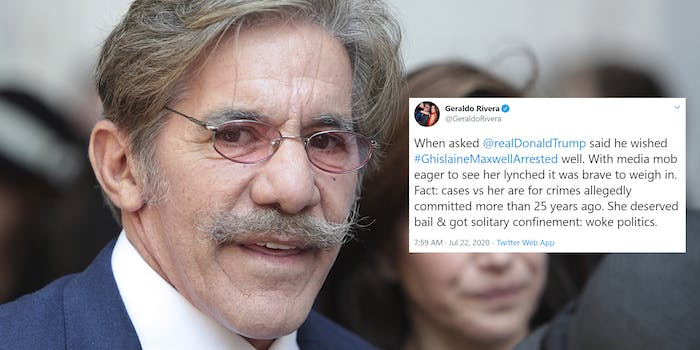 On Tuesday afternoon, just about everyone online watching President Donald Trump’s press conference was appalled by his response to a question about Ghislaine Maxwell.

When asked about Maxwell, the former partner of notorious sex trafficker Jeffrey Epstein who was recently arrested for grooming underage girls, Trump said he “wished her well.”

That Trump would wish well the alleged accomplice of one of the world’s most notorious pedophiles left everyone on Twitter with their jaw hanging down. It was particularly galling because Trump has been photographed with both Maxwell and Epstein.

But one man—Fox News regular Geraldo Rivera—was brave enough to stand up to the wokescolds.

“When asked @realDonaldTrump said he wished #GhislaineMaxwellArrested well,” Rivera tweeted on Wednesday. “With media mob eager to see her lynched it was brave to weigh in. Fact: cases vs her are for crimes allegedly committed more than 25 years ago. She deserved bail & got solitary confinement: woke politics.”

Rivera is apparently bothered that people want Maxwell brought to justice, and more interestingly, that committing pedophilia a long time ago is a prosecutable matter.

For that, Geraldo was summarily dunked online.

“Do you know her,” asked actress Alison Fraser.

It’s quite the hill to die on.