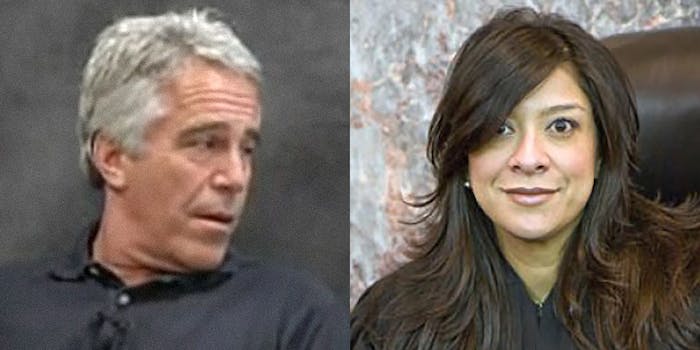 Judge Esther Salas' son was shot and killed at her home four days after she was assigned to an Epstein-related case.

Update 11:58am CT: According to ABC News, a suspect in the shooting has been found dead by a self-inflicted gunshot wound.

Authorities have told ABC that the man was a lawyer who had a previous case against the judge in 2015.

According to the New York Post, the body of the man has been identified as Roy Den Hollander, who has been called a mens’ rights activist.

He has reportedly written letters to sitting U.S. senators complaining of “Feminazis.”

A new wrinkle in the Jeffrey Epstein saga has appeared, causing many prominent social media voices to once again call foul play.

On Sunday, a gunman who appeared to be dressed as a FedEx driver opened fire on the home of New Jersey Federal Judge Esther Salas, CNN reports. The gunman killed Salas’ 20-year-old son, Daniel Anderl, and critically injured her husband, Mark Anderl. Salas was reportedly unharmed.

U.S. Marshals and the FBI are currently investigating the shooting.

In 2018, Salas sentenced Farad Roland, leader of the Newark, New Jersey-based South Side Cartel gang, to 45 years in prison on federal racketeering charges. But on Thursday, Salas was assigned to a class-action lawsuit against Deutsche Bank, which, according to Bloomberg, “allegedly misled investors about anti-money-laundering deficiencies.”

The suit further alleges that Deutsche Bank “failed to properly monitor customers that the Bank itself deemed to be high risk, including, among others, the convicted sex offender Jeffrey Epstein,” per court records.

Epstein died by apparent suicide on Aug. 10, 2019, in his Manhattan jail cell. The financier had been charged with sex trafficking underage girls as young as 14. His death triggered a deluge of conspiracy theories, with many people theorizing that somebody within Epstein’s elite inner circle orchestrated his assassination. (Epstein had previously been photographed at parties with President Donald Trump, Bill and Hillary Clinton, and Elon Musk, among other political figures and socialites.)

Likewise, many Twitter users found it suspicious and not-at-all coincidental that a gunman attacked Salas’ family days after she was assigned to an Epstein-related case. Some people deemed it a “hit” rather than a senseless act of violence.

“Judge Salas was assigned 4 days ago to unravel all of the money laundering in the Epstein case,” comedian Tim Dillon tweeted. “Hundred of millions worth with banks, suspects, whole black book. Yesterday a gunman shows up at her house, shoots her husband, kills her son, and escapes without going into house.”

Dillon also theorized that a similar situation could befall Ghislaine Maxwell, Epstein’s ex-girlfriend and alleged accomplice in his sex trafficking ring. The FBI arrested Maxwell earlier this month on charges of conspiracy to entice minors to travel to engage in illegal sex acts.

Newsweek columnist and Proof of Corruption author Seth Abramson theorized in a thread that the attack against Salas was meant to delay the Deutsche Bank case until after the 2020 presidential election. Abramson conceded it was too early to craft an investigative theory about the attack, but Trump’s ties to Deutsche Bank established a precedent for wanting to delay the case.

“For the record,” Abramson added, “I agree that you don’t have to have any interest in researching criminal conspiracies to believe that one of the Epstein judges facing an attempted assassination 96 hours after she gets the case is suspicious as hell.”

However, given her work on gang cases, a simpler explanation here is just as plausible.