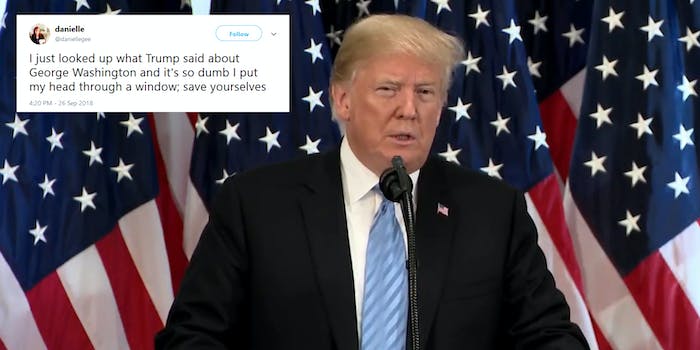 President Donald Trump brought up the nation’s first president when defending Supreme Court nominee Brett Kavanaugh on Wednesday evening, accusing Democrats of being “obstructionists” who would vote against George Washington if he was up for a Supreme Court seat.

The comments came as Trump blasted the numerous accusations that have come against Kavanaugh in recent days and added that he would be watching the hearing where Dr. Christine Blasey Ford will testify on Thursday.

Trying to illustrate his point that Democrats had made up their minds about Kavanaugh’s appointment, the president said even Washington wouldn’t garner votes.

Trump questioning the sexual past of George Washington is peak 2018

We are officially in Bizarro World. Trump is claiming that George Washington was a sex pervert in defense of Kavanaugh. https://t.co/bsegRE30zT

I just looked up what Trump said about George Washington and it's so dumb I put my head through a window; save yourselves

I didn't anticipate the attack on George Washington

Democrats would be absolutely correct to vote against placing a slaveowner on the Supreme Court, for the record.

Trump has also brought up that Washington was a slave owner during his much-criticized press conference in the aftermath of the violence that occurred in Charlottesville, Virginia.