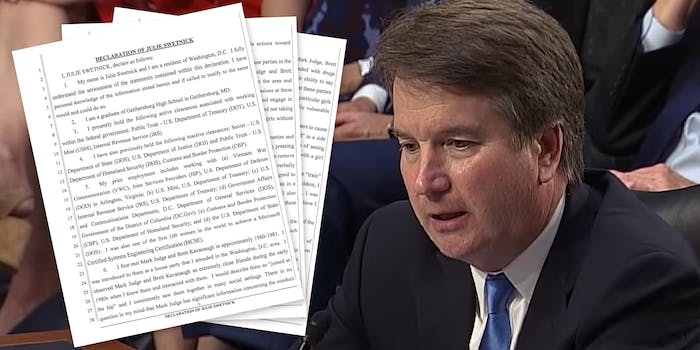 She says Kavanaugh and his friends targeted vulnerable women and spiked their drinks.

On Wednesday, attorney Michael Avenatti released a statement given under oath by his client, Julie Swetnick, who says she was witness to, and victim of, sexual violence and misconduct at house parties Brett Kavanaugh attended and hosted in the early 1980s.

In her affidavit, Swetnick says she met Kavanaugh at a house party and continued to see him at parties, which she said were a near-weekly occurrence during the school years of 1981 to 1983. “On numerous occasions at these parties, I witnessed Mark Judge and Brett Kavanaugh drink excessively and engage in highly inappropriate conduct, including being overly aggressive with girls and not taking ‘No’ for an answer,” said Swetnick in her declaration. “This conduct included the fondling and grabbing of girls without their consent.”

Other physically aggressive sexual behavior Swetnick witnessed included “pressing girls against him without their consent, ‘grinding’ against girls, and attempting to remove or shift girls’ clothing to expose private body parts.” She said he was also verbally abusive and would make “crude, sexual comments” to girls in order to “demean, humiliate, and embarrass them.”

Below is my correspondence to Mr. Davis of moments ago, together with a sworn declaration from my client. We demand an immediate FBI investigation into the allegations. Under no circumstances should Brett Kavanaugh be confirmed absent a full and complete investigation. pic.twitter.com/QHbHBbbfbE

Swetnick called Kavanaugh’s claims of innocence “absolutely false and a lie” and said he consistently showed this inappropriate sexual behavior throughout her time knowing him. The most damning part of Swetnick’s affidavit is when she recounts efforts by Kavanaugh and his friend Mark Judge to “target” specific girls they viewed as vulnerable and “spike” drinks. “I became aware of efforts by Mark Judge, Brett Kavanaugh and others to spike the ‘punch’ at house parties I attended with drugs and/or grain alcohol so as to cause girls to lose their inhibitions and their ability to say ‘No,’” she said.

According to Swetnick, this was often a part of preparing women to be gang raped. “I have a firm recollection of seeing boys lined up outside rooms at many of these parties waiting for their ‘turn,’” Swetnick declared. “These boys included Mark Judge and Brett Kavanaugh.” Swetnick shared that she was the victim of gang rape at one of these parties, and both Judge and Kavanaugh were present.

In a statement from the White House, Kavanaugh said of Swetnick’s allegations, “This is ridiculous and from the Twilight Zone. I don’t know who this is and this never happened.”

Swetnick’s attorney, Avenatti, who also represents Stormy Daniels in her lawsuit against President Donald Trump, has called for a “full and complete investigation” before Kavanaugh’s confirmation goes to vote.

While other women have come forward with allegations that Kavanaugh assaulted them—including Christine Blasey Ford, who will testify in front the Senate Judiciary Committee tomorrow, and Deborah Ramirez, who came forward in a New Yorker story on Sunday—Swetnick is the first to make a declaration under oath. She states in her affidavit that she will testify if need be. The committee plans to vote on Kavanaugh’s confirmation on Friday.