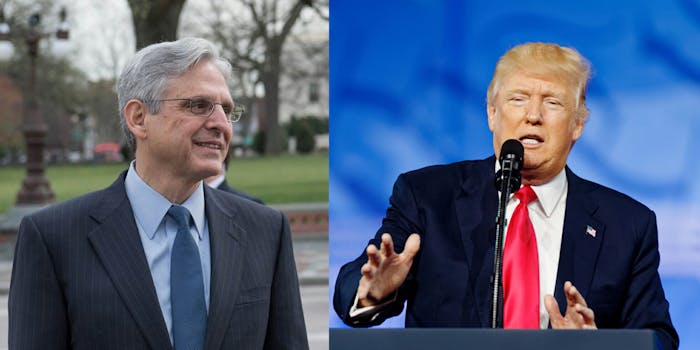 Moments after Supreme Court Justice Anthony Kennedy announced he would retire next month—thus giving President Donald Trump another shot at nominating a conservative justice to the nation’s highest court—people online suggested the president take a different route and instead push for “civility” by nominating a name plenty of people are familiar with: Merrick Garland.

Garland was President Barack Obama nominee before the 2016 election, and was blocked by Republicans in the Senate, hoping to get a conservative on the court.

They succeeded—and even though they’ll do it again—that hasn’t stopped centrist dweebs from pleading with the president on Twitter to make a move to the middle.

Carper on who Trump should nominate: “If I were the president, I would say, how can I restore some comity, some sense of bipartisanship around here? I would say Merrick Garland is still available.”

I hope the Senators realize the best compromise is for Trump to appoint Merrick Garland. He's a moderate in the center. A needed gesture to start healing the country. #justicekennedy #SCOTUS

Would be ironic if Trump selected Merrick Garland to replace Justice Kennedy on the SC. Soften up the Dems before November with a like for like, give a fuck you to Obama for not being able to get it through & then hit US with a right wing replacement for Ginsberg after midterms.

Trump should offer to appoint Merrick Garland to the court if RBG retires.

While some people are hoping for some sort of hypothetical compromise and civility in politics, others have already called on Democrats to try and block any Supreme Court nominee Trump sets forward.

Other people online are demanding that Democrats only vote for, surprise, Garland.

Basically, the fight on Twitter was exactly what you’d expect.

BREAKING NEWS: Supreme Court announces Justice Kennedy is retiring. Trump to receive another pick for SCOTUS.@SenSchumer and @SenateDems better pull a Mitch McConnell and block every single one of Trump’s nominations and shout “Merrick Garland” as they’re doing it.

I think @SenSchumer should promise voters that if Democrats control the Senate, he won’t hold a hearing or a vote next time Trump nominates anyone besides Merrick Garland to be a Supreme Court Justice

Fuck Mitch McConnell. Trump’s next Supreme Court nominee should be given the Merrick Garland treatment. https://t.co/qB5zRuli8b

Dems need to move heaven and Earth to block a trump scotus nominee because of the GOP's block on Garland 2 years ago.

It will only take 51 Senate votes to confirm Justice Kennedy replacement. Trump has vetted list & will rush this nomination, push unrelentingly 4 confirmation with 130+ days to election. Dems must remember McConnell obstruction on Merrick Garland. Elections have consequences!!

Of course, Sen. Warren is already saying Dems shouldn't obstruct SCOTUS pick because that would "further erode norms." "Depends on the nominee," she says, as if Trump will pick anyone not wingnutty. Eye for an eye! They stole Garland, we steal back. Let SCOTUS be 8 until 2021!

OMG! Just when you thought this week couldn't get more lit… I give you Anthony Kennedy's retirement from #SCOTUS

None of this will happen. Trump will almost assuredly nominate a staunchly conservative justice to the Supreme Court, to solidify a right-leaning court for the foreseeable future.

And Democrats will cave. In fact, they already have.

Dem. Senator BLUMENTHAL: “The Senate should do nothing to artificially delay” consideration of next justice, but POTUS should take his time & make a centrist choice.

So yes, of course Trump will pick Garland instead of getting exactly what he wants.