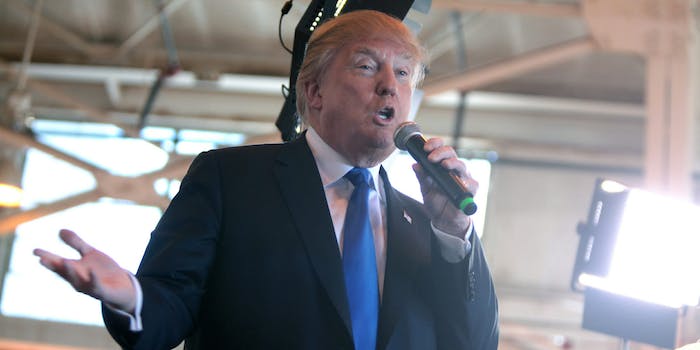 The 6 wildest things Trump said in his Forbes interview

He challenged Rex Tillerson to an IQ test.

President Donald Trump gave a wide-ranging interview with Forbes where he spoke about his tenure so far as the president, admired his gold-fixture adorned Oval Office, and even suggested that he and Secretary of State Rex Tillerson compare IQ tests in response to Tillerson allegedly calling the president a “moron.”

Here are some of the wildest things Trump said in the interview, which you can read in full here.

Last week, NBC News reported that Tillerson had considered leaving the Trump administration earlier this year–particularly after the president’s off-the-walls speech at the Boy Scouts of America. In the same report, sources told the news outlet that Tillerson had called the president a “moron” or “fucking moron.” Tillerson denied thinking of leaving his position in an impromptu press conference but didn’t directly deny calling Trump a moron. The State Department later released a statement denying he said that.

Trump still can’t seem to let that saga go. In the Forbes interview, he said he thought the NBC News report was “fake news” but still seemed determined to prove everyone that he is, in fact, not a moron.

“But if he did that, I guess we’ll have to compare IQ tests,” he said. “And I can tell you who is going to win.”

Trump claimed, once again, that he has passed more legislation thus far in his presidency than any other president–despite numerous, non-partisan, fact-checks attempts by media outlets and other organizations showing that his claim is incorrect.

“”I’ve had just about the most legislation passed of any president, in a nine-month period, that’s ever served,” he said. “We had over 50 bills passed. I’m not talking about executive orders only, which are very important. I’m talking about bills.”

3) Trump teases an economic bill no one’s heard about

Speaking with the Forbes reporters, Trump teased what he said will be a “fantastic” economic-development bill that “nobody knows about.”

The bill apparently would reward companies that keep jobs in the United States and “severely” penalize companies that send workers overseas. Or, as Trump described it: “It’s both a carrot and a stick.”

4) Being president is “fun”

Despite numerous other instances of Trump seemingly being miserable, isolated, or worse during his first several months in office, he swore to the Forbes reporters that he is enjoying his time as president.

“I am having fun. I’m enjoying it. We’re accomplishing a lot,” Trump said, before touting the stock market numbers.

Trump has been criticized for his responses of Hurricane Harvey, Hurricane Irma, and Hurricane Maria.

During Harvey, Trump said he would donate $1 million to the relief efforts, but where exactly the money would come from was a question left unanswered. He also admired the turnout of those who came to see him speak and called the hurricane “epic.”

As for Hurricane Maria, the president lashed out at the mayor of San Juan, Puerto Rico amid recovery efforts and also tossed rolls of paper towels at hurricane victims. The president was also criticized for saying Maria was not a “real catastrophe like Katrina.”

Despite all of that, Trump said he thinks things have gone well for him.

Trump said he has been slow to make appointments across the federal government in an effort to make the country more efficient. The State Department, as Forbes points out, has more than half of the positions unfilled. This is by design, Trump said.

“I’m generally not going to make a lot of the appointments that would normally be—because you don’t need them,” he said. “I mean, you look at some of these agencies, how massive they are, and it’s totally unnecessary. They have hundreds of thousands of people.”

You can read Forbes’ interview with the president here.