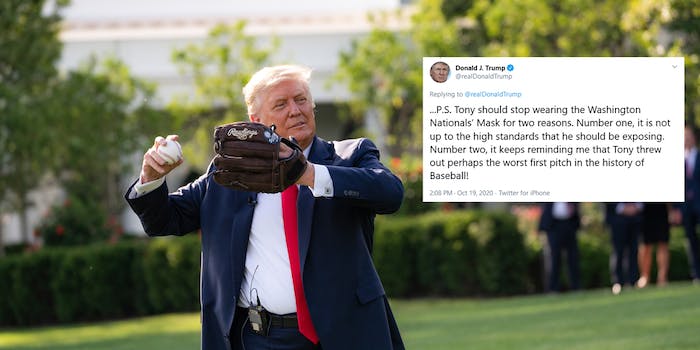 Trump is fixated on Fauci’s first pitch—but is it the ‘worst’ ever?

There are a lot of bad first pitches. Fauci's probably isn't the worst.

President Donald Trump oddly went after Anthony Fauci, one of the nation’s top infectious disease experts, with an out-of-left-field tweet on Monday afternoon.

The president made fun of Fauci’s ill-fated first pitch earlier this year and also mocked him for wearing a Washington Nationals mask.

It’s an odd line of attack from Trump, who just recently used Fauci in a campaign ad, but here we are. Trump’s baseball-related attacks came after a tweet about Fauci being on TV.

“…P.S. Tony should stop wearing the Washington Nationals’ Mask for two reasons. Number one, it is not up to the high standards that he should be exposing. Number two, it keeps reminding me that Tony threw out perhaps the worst first pitch in the history of Baseball!” the president wrote, presumably misspelling “espousing.”

Trump then retweeted someone who posted a video of him throwing out the first pitch at a Somerset Patriots, a New Jersey-based independent league team, in 2004.

This isn’t even the first time Trump has tweeted mockingly about Fauci’s pitch.

Given that we’re in the midst of an election, a pandemic, and a host of other issues are going on, bringing up unfortunate first pitches seems a little off topic—but it’s hard to say whether or not Fauci’s is the “worst” or not.

Back in July, Fauci threw out the first pitch before Major League Baseball’s first game of its coronavirus-shortened 2020 season. It wasn’t great.

But should Trump be calling Fauci’s first pitch “perhaps the worst first pitch in the history of baseball?” It’s hard to distinguish which one is “worst” because there are a lot of contenders for the top spot.

It is also worth noting that Trump had a bizarre baseball-related statement around the same time as Fauci’s appearance on the mound where he claimed he would be throwing out a first pitch at a New York Yankees game—something that apparently came as a shock to the team.

So clearly the president has a fixation.

At the time, Fauci’s first pitch drew a lot of comparisons to rapper 50 Cent’s first pitch before a New York Mets game in 2014. 50 Cent’s wide-left pitch is often cited when talking about the “worst” first pitches.

The comparisons hold up, as there are certainly some similarities. Both of them careen to the left. Although, Fauci’s hit the infield grass quickly, where as 50 Cent’s sailed until it was past the infield dirt around home plate.

If you are comparing the two, it could be argued that 50 Cent’s was worse because it clearly was off target, where as Fauci could have had the ball slip from his hand, leading to it hitting the ground early. But either way, neither of them are good.

But there are other first pitches that arguably are worse.

Singer Carly Rae Jepsen had a pitch that nearly immediately hit the infield grass in 2013 at a Tampa Bay Rays game. Again, it could have been because the ball slipped out of her hand while she was throwing.

Former Cincinnati Mayor Mark Mallory’s wild first pitch in 2007 also is probably near the top of the contenders for “worst” ever. It’s similar to 50 Cent’s in that it soars far to the left.

The list goes on—there are countless other bad first pitches.

And then, of course, there is whatever this is.

At the end of the day, there is no doubt that Fauci’s pitch wasn’t great, and probably ranks among the worst.

Then again, it’s not like Trump has any major league first pitches to compare against Fauci’s.